My pick for the best new science fiction and fantasy release at Audible.com in October 2010 is: Surface Detail: A Culture Novel by Iain M. Banks, narrated by Peter Kenny (Hachette Audio). 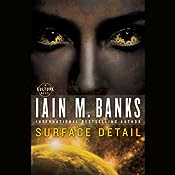 It begins in the realm of the Real, where matter still matters. And it begins with a murder.

Lededje Y’breq is one of the Intagliated, her marked body bearing witness to a family shame, her life belonging to a man whose lust for power is without limit. Prepared to risk everything for her freedom, her release, when it comes, is at a price, and to put things right, she will need the help of the Culture.

Benevolent, enlightened and almost infinitely resourceful though it may be, the Culture can only do so much for any individual. With the assistance of one of its most powerful – and arguably deranged – warships, Lededje finds herself heading into a combat zone not even sure which side the Culture is really on. A war – brutal, far-reaching – is already raging within the digital realms that store the souls of the dead, and it’s about to erupt into reality

More from Bull Spec reviewer Patrick Ward: “Surface Detail is an act of colossal imagination and an artifact of superlative worldbuilding. Banks uses his characteristic staccato writing style to simultaneously disorient and hypnotize, preparing the reader for an eloquent foray through fideistic characters and the sometimes-horrifying actions of their virtual simulacra. Taken as a whole, the Culture novels have done for science fiction what Wolfe’s The Book ofthe Long Sun did for fantasy. Surface Detail continues this tradition with moving, horrific, and ultimately satisfying aplomb.”