Russian urban fantasist Sergei Lukyanenko’s audiobooks have been a long while coming, but they were worth the wait, and they are my pick(s) for the best new science fiction and fantasy release of December 2010 at Audible.com. Paul Michael narrates Audible Frontiers productions of all four Watch books, all published in the wee hours of 2010: 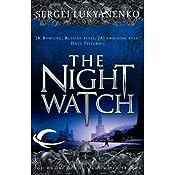 Publisher’s summary and some blurb-worthy blurbs:

Set in modern day Moscow, Night Watch is a world as elaborate and imaginative as Tolkien or the best Asimov. Living among us are the “Others”, an ancient race of humans with supernatural powers who swear allegiance to either the Dark or the Light. A thousand-year treaty has maintained the balance of power, and the two sides coexist in an uneasy truce. But an ancient prophecy decrees that one supreme “Other” will rise up and tip the balance, plunging the world into a catastrophic war between the Dark and the Light.

When a young boy with extraordinary powers emerges, fulfilling the first half of the prophecy, will the forces of the Light be able to keep the Dark from corrupting the boy and destroying the world?

“Brace yourself for Harry Potter in Gorky Park…. The novel contains some captivating scenes and all kinds of marvelous, inventive detail: The vampires’ seduction of a teenage boy is bone-chilling; every time Lukyanenko described the Other-worldly Twilight, I felt lured into it; and the fantastical powers exercised by Anton and his colleagues range from delightful to awesome.” (The Washington Post Book World)

“[As] potent as a shot of vodka…. [A] compelling urban fantasy.” (Publishers Weekly)

“Night Watch is an epic of extraordinary power.” (Quentin Tarantino)