Dean has done a fantastic job with Gibson’s “Big End” novels, particularly Spook Country and Zero History, and this one just popped up on Audible.com today, out of the blue, out of left field, out of a sky “the color of television, tuned to a dead channel.” 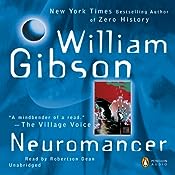 I haven’t had a chance to listen to this one yet (hey, Penguin Audio, a little heads up next time!) but, well, the publisher’s summary does some justice:

Twenty years ago, it was as if someone turned on a light. The future blazed into existence with each deliberate word that William Gibson laid down. The winner of Hugo, Nebula, and Philip K. Dick Awards, Neuromancer didn’t just explode onto the science fiction scene – it permeated into the collective consciousness, culture, science, and technology.Today, there is only one science fiction masterpiece to thank for the term “cyberpunk,” for easing the way into the information age and Internet society. Neuromancer’s virtual reality has become real. And yet, William Gibson’s gritty, sophisticated vision still manages to inspire the minds that lead mankind ever further into the future.

This is one of those foundational books of the genre, and I’ve re-read it several times over the years. Next time around, I’m looking forward to hearing Dean’s Case, Molly, Armitage, Lady 3Jane, and Wintermute — though on first sampling, I have my worries as to whether Dean is well-cast here or not.