My most anticipated title this month is, not surprisingly, A Dance with Dragons by George R. R. Martin (Coming July 12, 2011) narrated once again by Roy Dotrice: 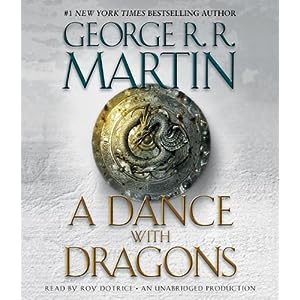 Another audiobook (among several!) to watch out for in July: Germline is the debut novel by South Carolina author T. C. McCarthy (Coming July 26, 2011) and is narrated by Donald Corren, beginning a new military SF series.

The next round of Iambik Audiobooks titles should go live pretty much any time now, one to watch out for is Paul Jessup’s Open Your Eyes, among others (and if you can’t wait, they are already available direct from Iambik). I’m also hoping to see a title from Buzzy Multimedia show up sooner rather than later, that being last November’s The Greyfriar by Clay and Susan Griffith (Pyr). And while Jay Requard’s debut fantasy novel The Night doesn’t have a release date, I am fairly sure it’s coming fairly soon. Just not (yet?) in audio.

Whew. So: what are you looking forward to in July? How about later this year?