Previewing August 2011 (and remarking on its first week)

August is already well upon us, with the first week bringing a spectacular list to audio. I already noted the First Friday titles Among Others (by Jo Walton) and All the Lives He Led (by Frederik Pohl), and there’s a few more already out this month that warrant immediate notice: 1968’s Stand on Zanzibar by John Brunner and 1960’s A Canticle for Leibowitz by Walter M. Miller. Brought to Audible.com via Macmillan Audio and Blackstone Audio, respectively, they are two of the great works of sf and I’m very happy to see them come to Audible.com. Still, in light of their having already been released, it’s hard to pick them as my most anticipated title for August. That “honor” goes to Lev Grossman’s The Magician King: 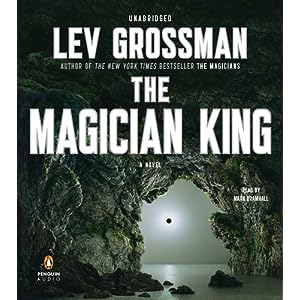 Sequel to the 2009 novel The Magicians, and narrated once again by Mark Bramhall, I had the pleasure of reading the book several months ago as an early reader. But there’s something about Bramhall’s narration of The Magicians which has me quite giddy with excitement about being taken back into Grossman’s world. While reading, the book’s words played tricks in my ears as I imagined Bramhall’s voice and inflections, and, really, I just can’t wait to hear it. Some early reviews of the audiobook are out (an A+ review on The Guilded Earlobe) and all signs point to another wonderful experience.