Just added at Audible.com: A Blight of Mages by Karen Miller (and some other things)

Link: Just added at Audible.com: A Blight of Mages by Karen Miller (and some other things)

A Blight of Mages is the latest audiobook from Karen Miller, narrated by Eileen Stevens: 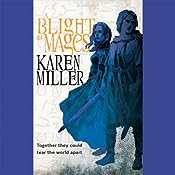 Teaser: “Hundreds of years before the great Mage War, a land lies, unknowing, on the edge of catastrophe….” Miller’s “Mage” books number in quite the several, and it’s been a series I’ve wanted to jump into several times but just haven’t found the time. Yet. I need to find a reading guide to figure out where to begin…

Whew. There’s a few things I’m expected to see on Tuesday (the 16th) and the second half of August is upon us. What have you been listening to this month, and what are you looking forward to in the second half?