Today sees the Audible.com release of The Vaults by Toby Ball narrated by Michael Agostini: 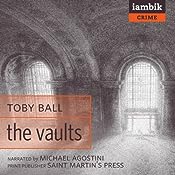 Also available directly from Iambik Audio, this is the September 14, 2010 debut novel for Ball, with starred reviews from Publishers Weekly and Library Journal, and some good reviews over on its Amazon.com page (The Vaults by Toby Ball, St. Martins Press).

In a dystopian 1930s America, a chilling series of events leads three men down a path to uncover their city’s darkest secret.

At the height of the most corrupt administration in the City’s history, a mysterious duplicate file is discovered deep within the Vaults—-a cavernous hall containing all of the municipal criminal justice records of the last seventy years. From here, the story follows: Arthur Puskis, the Vault’s sole, hermit-like archivist with an almost mystical faith in a system to which he has devoted his life; Frank Frings, a high-profile investigative journalist with a self-medicating reefer habit; and Ethan Poole, a socialist private eye with a penchant for blackmail.

All three men will undertake their own investigations into the dark past and uncertain future of the City—-calling into question whether their most basic beliefs can be maintained in a climate of overwhelming corruption and conspiracy.

The sample seems quite well-narrated, and I hope to find time to sneak this one into my listening before the year is out.