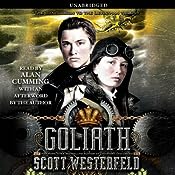 And over on Westerfeld’s blog, there’s a video conversation/interview between author and narrator.

The biggest surprise today is the absence of Neal Stephenson’s Reamde which is out in print and, at least theoretically, in audiobook from Brilliance Audio. But no sign at Audible.com this morning, and a quick check at the “Coming Soon” page shows the book is now “scheduled” for “September/October 2011”. So: sometime soon. Not sure what the issue is, as Amazon.com owns both Audible.com and Brilliance Audio, but anyway: Tick, tick, tick, …

Meanwhile, yesterday saw a couple of interesting things. Not so much (at least on a personal level) in terms of the books themselves, but where they came from as a signal for where audiobooks might be going. The first is Altered Destiny by Shawna Thomas narrated by Uma Incrocci from Harlequin e-imprint Carina Press, production copyright Audible, Inc. Released concurrently with a Kindle version, it is one of quite a few dual releases from the imprint, which mostly is more heavily romance line (which doesn’t get my interest) but from time to time puts forward a more earnestly fantasy or even science fictional book.

The second is Wasteland by Keith Crews narrated by John Bell. Originally self-published via Smashwords and on Nook, it’s Crews’s first audiobook. An earlier novel, Wraith, was published in December 2005 by PublishAmerica, notable for its inclusion on the Writer Beware “Thumbs Down” list. Narrator Bell is listed as a frequent narrator of dramaticized Bible stories. The audiobook publisher is listed as QC Computing, LLC which has one other title, also released yesterday, a self-narrated non-fiction self-help (ish) book Radically Simple Accounting: A Way out of the Dark and Into the Profit by Madeline Bailey. All of this is a bit rambling, but: this does look like a professional quality production, with a nice cover: 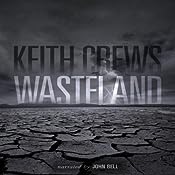 And it all adds up to something I can’t quite put my finger on, but something like: Even a self-published audiobook from a small, new publisher can look and sound professional. I’m not sold on the product description or the writing (your mileage may vary of course — I have fairly specific interests I suppose) but a world of audiobooks seems to be opening up. Here’s to a bright future for listeners. Something like that.