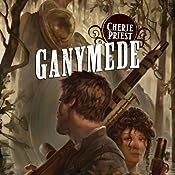 The Clockwork Century began with 2009’s Boneshaker (narrated by Wil Wheaton and Kate Reading), followed by the short novel Clementine: A Novel of the Clockwork Century (read by Dina Pearlman and Victor Bevine) and a full-size follow-up, Dreadnought (once again narrated by Reading). Here, the Macmillan Audio production of Ganymede is narrated by Edoardo Ballerini.

The Clockwork Century began with a powerful drill and zombies (the eponymous Boneshaker), launched an airship with pirates (Clementine), boarded a train (Dreadnought), and Ganymede looks to take its readers (and listeners!) beneath the waves in a submersible. Though what I really want is more Jeremiah Swakhammer, I don’t, I suppose, get to pick. Anyway, there are some bridge characters to follow, though the Clockwork Century books have all been standalone, not requiring the others to stand up, and I would be surprised if Ganymede was any exception.

Technically, Ganymede was added to Audible.com yesterday; but it was late enough in the day that it escaped my notice until this morning.

OTHER OF MY MOST-ANTICIPATED TITLES ALSO OUT TODAY:

And while I’m at it, some recent Free for Members content: