Out today, after yesterday’s big releases and news: Mr. Fox: A Novel By Helen Oyeyemi Narrated by Carol Boyd From AudioGO: 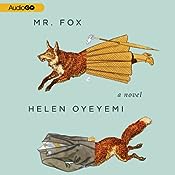 I must have overlooked this book in the Amazon.com October Best Books of the Month, and missed her interview with Fantasy Matters despite a mention on the World SF blog, but I *just* read in more detail about this novel via Jeff VanderMeer’s Omnivoracious blog and, well, pretty much everything he recommends I’ll at least check out. (And with good results, as Nnedi Okorafor’s Who Fears Death, Lauren Beukes’s Zoo City, Charles Yu’s How to Live Safely in a Science Fictional Universe, and Karen Lord’s Redemption in Indigo ended up becoming four of my favorite audiobooks. When he says things like: “One of the best of the next generation of writers working in the interstices of realism and the fantastical, Oyeyemi seems set to keep delivering up thought-provoking, emotive, and unclassifiable fiction for a long time to come.” — I will be checking out said book.)