WHAT: The Passage By Justin Cronin Narrated by Scott Brick, Adenrele Ojo, and Abby Craden For Random House Audio: 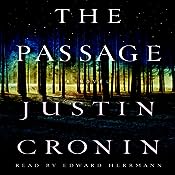 HOW: Borrowed from the Durham County Library as 29 discs.

WHY: Explained this pretty well (and at some length) in my Currently Listening To post for the audiobook. Summary: Lev Grossman recommended it. It was at the library. I was between credits.

THE STORY: The first segment of the book was very well done: a rainforest expedition encounters some really nasty bats and unleashes a strange sickness; the government launches “Project Noah” to investigate the possibilities of the disease, enlisting Agent Wolgast to round up death row convicts and eventually bring in a young abandoned girl, Amy; and all that. As society started to collapse in the wake of the Colorado outbreak, however, so did my ability to suspend my disbelief: 1. No, this doesn’t seem at all the way in which a war and quarantine might happen; 2. No, this system of trains and colonies doesn’t seem at all the way in which society would attempt to save itself — and if it were, it doesn’t seem at all a way which would work. But I’ll forgive these bridge concerns; there are plenty of interesting novels set in future worlds that probably wouldn’t happen — even if you grant superhuman vampire zombie telepaths, etc.

We interrupt this thriller for The City of Ember: Vampire Menace Edition. It’s really as the story picks back up solidly in the farther future timeframe with the Colony that something very annoying begins to occur, again and again. We have, on the one side, The Disposables, the Redshirts if you will, who are either deserving of dying, or old and at peace, or for whom we aren’t really made to fully connect with. On the other side we have the Core group, whose lives are completely sacrosant, whom Cronin places into dire peril (at the hands of superhuman telepathic vampire zombies, etc.) again and again — only to escape, again and again, with mere flesh wounds. “OK, OK. This time, surely this time, when one of the Core protagonists is carried off bodily into the night by vampires they’ll actually die. Not so much.

There’s an occasional body on the floor just to keep us the barest bit honest — but, really, Mr. Cronin, ending the novel on a SPOILER cliffhanger, after playing rope-a-dope with your characters in that obvious pattern of “place vulnerable character in mortal peril; rescue them” time after time again… ARGH!

THE NARRATION: I’ll be honest. I’m not the biggest Scott Brick fan — some of that is unfamiliarity, as I’ve only listened to a few of his narrations — but somewhere about the half-way part of the audiobook, the narration finally clicked for me as a great fit for the novel. I was less sold on the brief narrations from the other narrators, though they offered help in distinguishing the structurally distinct “journal” and “reference” sections, helping create an overall well-knit narration of a lengthy novel. Brick’s handling of the iconic lines from the book: “WHO AM I. WHO AM I. …” was perfect, and his “every moment is very important and poignant” narration matched the frenetic, galvanized vampire-attack-a-minute pace of the novel quite well in the end.

THE VERDICT: You’d think that with all my complaining, I hated it. No, not so much. We pick apart most that which we love, I suppose. In the end I both liked it a lot, and was frustrated by its flaws. “Why don’t these super smart vampires just wear a little armor over this soft-bone ‘sweet spot’ above their heart? Argh! Why did Amy SPOILER? Argh!” But there were many brilliant turns amidst the labyrinth of loops and spinning wheels as well, and, if Lev tells me I should, I’ll give the 2012 sequel, The Twelve, a try. Maybe.