Originally published by Badfort Press on Kindle in February, A Wind from the South: Raetian Tales, Book 1 By Diane Duane Narrated by Jessica Almasy comes to audio via Audible Frontiers: 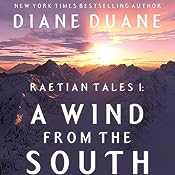 It’s a book I’ve heard nothing about and which I would generally skip over, but a couple of things about the cover give me pause: the first is that it is fairly striking; the second is that it boasts “New York Times Bestselling Author” across the top and, well, I figure I should probably look into this one a bit more closely and not just skim it over:

A goddess in the making… or a demon reborn? In the remote mountain village where she was born, Mariarta dil Alicg lives the untroubled life of a peasant girl – until, soon after a mysterious stranger’s arrival, she starts to hear voices in the wind. The voices whisper strange secrets in Mariarta’s ears, promising her the power to command the stormwind, hinting at an unknown, magical heritage, and prophesying a fate marvelous past all of Mariarta’s imaginings.

Then a curse falls on Mariarta’s village, shattering the lives of her family and friends. Mariarta must set out across the mountain realm of Raetia in search of a way to break the curse – while also hunting for the truth about the beautiful and terrible being who Mariarta discovers is trying to possess her soul.

Mariarta’s search will lead her into hidden domains of sorcery, both dreadful and wondrous, and will finally embroil the young woman in the growing rebellion against her land’s cruel Austriac oppressors – but not before Mariarta comes face to face at last with the immortal Lady of the Storms and challenges her to one final battle for control of her life, her soul, and her destiny.

I know Almasy’s work via her narration on Robert J. Sawyer’s  WWW: Wake, but I am unfamiliar (let’s just call me ignorant and move on, shall we?) with Duane’s previous work, including her Young Wizard series, beginning with 1983’s So You Want to Be a Wizard: Young Wizard Series, Book 1 which was produced in 2002 by Recorded Books and, up through book 9, A Wizard of Mars: The Ninth Book in the Young Wizards Series, available at Audible. Another series, 2010’s Omnitopia Dawn: Omnitopia #1 (DAW Hardcover, Tantor Audio), appears to be ongoing as well. She’s also the author of several series’ worth of media tie-in novels, ranging from Star Trek to WotC’s Star*Drive, to Spider-Man, to SeaQuest DSV, X-Men, and X-COM: UFO Defense, along with several Net Force novels co-authored with Tom Clancy.

Via Duane’s Wikipedia entry, I learned a bit more about A Wind from the South:

Duane has recently made available in various e-formats a previously unpublished book which was sold to at least two European publishers, but never actually brought out due to internal restructuring at one publishing house (Corgi) and the sale of another (Heyne Verlag). The novel, A Wind from the South, is the first of a projected trilogy telling the story of a young girl born in the 11th century in a remote region of the Alps. This girl slowly discovers that she is the intended physical avatar of an exiled Roman goddess, while (as she grows) she becomes caught up in the political turmoil of William Tell’s time.