First: The Tower of Shadows (2006) By Drew Bowling Narrated by Paul Boehmer For Audible, Inc. — praised by both Terry Brooks and R.A. Salvatore, Bowling’s 2006 debut is described as: “From the boundless imagination and talented pen of a young storyteller springs the fabulous first novel in a major new epic fantasy series. Steeped in the traditions of its classic forebears, yet boldly original in its vision and sense of wonder, The Tower of Shadowsswells with heroism, sings with enchantment, and carries the reader at full gallop into a marvelously wrought world of breathtaking adventure.” 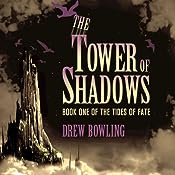 In a 2008 interview with Aidan Moher, Bowling talked about “an upcoming sequel, The Sea of Dreams” — but so far this appears to be Bowling’s only novel.

Second, firing up the wayback machine (for low values of wayback, I suppose), is A Quantum Murder (1994) By Peter Hamilton Narrated by Toby Longworth For Audible Frontiers — Book 2 in the Greg Mandel Trilogy which began with Mindstar Rising: The Greg Mandel Trilogy, Part 1 which came to Audible.com just a week ago — ”Dr Edward Kitchener, a brilliant researcher into quantum cosmology, lies dead with his lungs spread out on either side of his open chest. Only a mercenary or professional killer could have breached the premier-grade security system – but why would a professional waste time in ritual slaughter? Greg Mandel, psi-boosted ex-private eye, is enticed out of retirement to launch an investigation into a past which – according to Kitchener’s theories – might never have happened.” 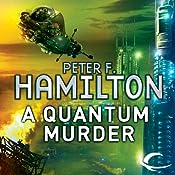 I assume this means that before too long we’ll see Hamilton’s 1995 trilogy finale, The Nano Flower. UPDATE: I should have waited a few more hours — The Nano Flower: Part 3 of the Greg Mandel Trilogy was indeed added later in the day.

Lastly: Nudge the wayback dial just a hair, for a novel which turned it up to 100 and added vampires: Anno Dracula (1992) By Kim Newman Narrated by William Gaminara For Audible Frontiers — described as “With the versatile voice talent of William Gaminara, acclaimed novelist Kim Newman explores the darkest depths of a reinvented Victorian London. It is 1888, and Queen Victoria has remarried, taking as her new consort the Wallachian Prince infamously known as Count Dracula. Peppered with familiar characters from Victorian history and fiction, the novel tells the story of vampire Geneviève Dieudonné and British spy Charles Beauregard as they strive to solve the mystery of the Ripper murders.” — blurbed as “Kim Newman’s Anno Dracula is back in print, and we must celebrate. It was the first mash-up of literature, history and vampires, and now, in a world in which vampires are everywhere, it’s still the best, and its bite is just as sharp. Compulsory reading, commentary, and mindgame: glorious.” (Neil Gaiman) 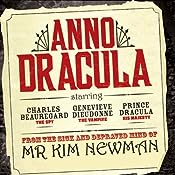