Oh boy. I’ve been waiting for this one so long that I forgot I was waiting for it — and then, here it is: Little, Big: or, The Fairies’ Parliament written and narrated by John Crowley for Blackstone Audiobooks — this 1981 modern fantasy novel was hailed as “A book that all by itself calls for a redefinition of fantasy.” by Ursula K. Le Guin, it won the 1982 World Fantasy Award and was nominated for that year’s Nebula, Hugo, BSFA, and Locus Award, it’s, well, a novel I’ve wanted to come to audiobook for a long, long time: 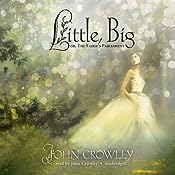 “Edgewood – which is not found on any map – is many houses, all put inside each other or across each other. It’s filled with and surrounded by mystery and enchantment; the further in you go, the bigger it gets. Smoky Barnable, who has fallen in love with Daily Alice Drinkwater, travels from the City on foot to Edgewood, her family home. There he finds himself on the magical border of an otherworld.”

Crowley also self-narrated for Aegypt, and from the sample here for Little, Big it sounds to be a marvelous production.