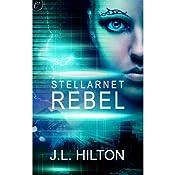 There she meets Duin, an alien speaking out against the invasion of his homeworld by the insect-like Tikati, and one blog post later they’re in the middle of a “dangerous web of passion and politics”. Throughout, Hendrix ably handles the dual linguistic challenges of alien languages on the one hand and leetspeak and gamer lingo on the other, and I’m very happy to have her here on the blog.

Q: Gayle, thanks so much for joining me to talk about Stellarnet Rebel.

A: Thanks very much, it’s my pleasure. I really enjoyed narrating Stellarnet Rebel and was very impressed to read that it is Ms. Hilton’s debut novel.

Q: After a prologue which sees an escape from a horrific prison, we pick up the story of Genny O’Riordan — and a good dose of humor — as she explores the interior of the colony and finds a small enclave of fellow Irish, centered around an Irish pub complete with real physical instruments. Was it fun to try on a few flavors of Irish brogue for these scenes?

A: I always enjoy accents – they help bring the characters alive as well as delineate them from each other. I’ve been lucky enough to play Irish characters in several plays and have to say it’s one of my favorite accents due to its lyrical line.

Q: When we first wrote, you mentioned being impressed with the novel, particularly as it is a first novel. What common debut novel mistakes did J.L. avoid?

A: I think that taking on the challenge of creating an entirely new world as many Sci-Fi fantasies try to do, and certainly this one does so successfully, calls for the author to create a compelling and accessible world from the very first sentence – otherwise, the readers (or listeners) will be discouraged or lost very quickly. Ms. Hilton does not waste a single word on unnecessary prose as she sets about to describe a world that is quite new to us without wasting a lot of time before the action starts. She also keeps the rules of her new universe consistent – I find it disconcerting when an author makes up the rules as the book goes along…changing them in order to move along the plot at will. The created worlds of vampires and zombies seems fraught with that. That being said, she also gives us enough information so that we can visually imagine the world she inhabits. The characters are distinctive and memorable. That always makes it easier for me as a narrator as well as a reader.

Q: The novel is not overly descriptive, but it does paint a few pictures as to the interior of a deep space colony, not just in terms of construction and sight lines and the futuristic technology associated with blogging and online gaming, but sounds, smells, and textures as well. I thought you did a great job bringing this book to life, what are some of the scenes which stand out for you?

A: Thank you so much for that feedback. I really felt as I was narrating this novel that it would make an excellent film because the characters are strong, the plot spins along, and it’s a very visual world. I read so many books that they often become somewhat amalgamated in my memory but the ones that stand out, like Stellarnet Rebel, do so because memorable characters have dialog that is both cogent and real and their world is visually enduring – somehow the author creates a place in your mind that can always be recalled no matter how much time has gone by.

I very much appreciated the initial scene introducing the Finder’s world called Meglin, which is beautifully depicted as a kind of Garden of Eden. I also thoroughly enjoyed voicing Colonel Blaze with his irreverent good ole boy military ways and peppery speech. And who can resist some well-written interspecies sex scenes!

Q: You’ve also narrated “very short introductions” to Socialism, Economics, and Human Evolution, which seem perfectly suited to this novel, dealing as it does not only with human evolution and genetic modification, but the evolution of two different alien species, one (shall we say…) “compatible” with humans, the other most definitely not — as well as the Glin’s more socialist perspectives on ownership where it comes to the essential ingredients of life: water, air, food, and knowledge.

A: You make an interesting connection, Sam. You’re right, although those titles you mention are part of an terrific non-fiction series called “Very Short Introductions to…” and really have no overt connection to Stellarnet Rebel it is true that these subjects are definitely woven throughout the script. Duin, the alien protagonist who wins Ginny’s heart and soul, is a very political character who sees the world from quite a different and arguably more “authentic” perspective because he is from another world, not steeped in years of Earth’s socio-economic realities and cultural attitudes. He represents quite a pure kind of socialistic nature, learns to deal with the economic realities of his new world quickly in order to survive, and is definitely an evolutionary phenomenon.

Q: Speaking of your other narrations, you were part of a large cast for the 2010 audiobook Intelligence: A Novel of the CIA by Susan Hasler, as well as two St. Martin’s Press/Audible Frontiers anthologies with some of the biggest urban fantasy authors in 2009, My Big Fat Supernatural Wedding and Strange Brew. What are some of the differences between solo narration, cast narration on a single novel, and working on an anthology project?

A: On solo narration I would have to mention how surprised and humbled I was when I first began narrating. I trained seriously as an actress but nothing I had done previously quite prepared me for the scope of things to consider while narrating a novel. It is simultaneously exciting and grueling while presenting a constant creative challenge on every page with each new voice and descriptive passage. If you start to coast, then you run the risk of losing your listener. Ultimately though, it is extremely satisfying to give voice, pace, life and soul to a cast of characters that comprise a world that flashes by you so quickly in the recording studio – no matter how carefully you prep the material.

Intelligence: A Novel of the CIA is different from solo narration because it is literally a multicast where every line of dialogue is spoken by a different narrator – although any given actor may play more than one part within the book. In the studio, every effort is made to have the actors literally speak to each other – and therefore act off each other, which is the best of conditions. It isn’t always possible to do that however, particularly when so many characters are involved, but it does make for interesting audio. Multicasts rely heavily on a Director and Editor to ultimately allow the story to flow well.

The anthologies that you mention are short stories that are grouped together by a theme. They are recorded separately and then assembled into an audiobook. As a listener, you might not find every voice equally pleasing, just as you might not find the stories equally to your liking, but I think they make for a very lively listen and are filled with writing gems. I love a good anthology when I have limited time to invest as a listener and I love short stories as a narrator because they are often beautifully written, succinct, and emotionally satisfying.

Q: You’ve also produced audiobooks for years; what should listeners know about that side of the studio desk?

A: Right off, I would mention how different my experience as a producer of audiobooks is from my experience as a producer of plays or film. When you are a stage or film producer, you become familiar with every aspect, literally every word of the script in the course of the production from beginning to end. The nature of audiobooks is quite different – one usually does not have the luxury of time to become as steeped in the entire process, so the significant work of the producer lies in assessing the script’s needs. You must look at the characters, accents, pronunciations, and over-riding tone of the story and then cast the right person to assure that the story is told clearly while remaining as faithful to the text as possible. A badly written book cannot be “saved” by a great narrator, certainly a good narrator will reveal it in its best light, but weak writing is very difficult to overcome. A wonderful book on the other hand, can be cast poorly and suffer for it. Regardless of your best efforts as a Producer, I am always struck by the inherently subjective nature of the human voice. What thrills one person might turn someone else off completely – I guess it’s simply the nature of the beast.

Q: What are some other narration projects you have coming up?

A: I’m recording a title now called A Kiss in the Wind by Jennifer Bray-Weber. It’s an historical romance replete with pirates, a cheeky troublemaking damsel, and lots of plot twists and turns set against the high seas of the 18th Century. It’s a vocal challenge – with all the colorful male characters that inhabit the pirate world – but ultimately it’s a very fun read and, of course, the female lead has that 21st Century chutzpah that is so entertaining to voice.

Q: Thanks again for your time and thoughts, Gayle!

A: Thank you so much Sam. I wish J.L. Hilton my very best on the debut of Stellarnet Rebel.