Coming in at nearly 48 hours, the big title this audiobook release week is The Stand By Stephen King, narrated by Grover Gardner for Random House Audio: 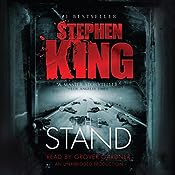 Not only is the recording unabridged, it’s the “complete and uncut” version of King’s classic post-apocalyptic tale, “includ[ing] more than 500 pages of material previously deleted, along with new material that King added as he reworked the manuscript for a new generation.” First published in it’s “abbreviated” (yet still doorstopping) form in 1978 and nominated for a World Fantasy award, Books on Tape released a two-part audio cassette version in 1987, read by Gardner, long out of “print”.