Posted on 2012-02-21 by montsamu
Since, though apparently I missed the memo, TC McCarthy’s Exogene is set for a March 1 release instead of coming out today as I’d mistakenly thought, the big audiobook release this week is 1632: Ring of Fire, Book 1 By Eric Flint, Narrated by George Guidall for Recorded Books:

Published in print by Baen in 2000, 1632 became a bestseller and spawned a bestselling series of alternate history and its own fanfiction magazine, its own track at Dragon*Con, and who knows what else. Synopsis: A small bit of modern (well…) Grantville, West Virginia is thrown back to northern Germany in 1632: “When the dust settles, Mike leads a small group of armed miners to find out what’s going on. Out past the edge of town Grantville’s asphalt road is cut, as with a sword. On the other side, a scene out of Hell; a man nailed to a farmhouse door, his wife and daughter Iying screaming in muck at the center of a ring of attentive men in steel vests. Faced with this, Mike and his friends don’t have to ask who to shoot. At that moment Freedom and Justice, American style, are introduced to the middle of The Thirty Years War.” 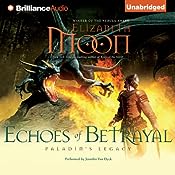 Concurrent with the print release from Del Rey: “The action continues fast and furious in this third installment of Elizabeth Moon’s celebrated return to the fantasy world of the paladin Paksenarrion Dorthansdotter. This award-winning author has firsthand military experience and an imagination that knows no bounds. Combine those qualities with an ability to craft flesh-and-blood characters, and the result is the kind of speculative fiction that engages both heart and mind.”