It’s another packed week of audiobook releases, with the two biggest books for me both being previously released in hardcover from Tor, and both dealing with near/medium future ecological change: Tobias S. Buckell’s Arctic Rising and M. M. Buckner’s The Gravity Pilot.

ARCTIC RISING: Out in hardcover and e-book from Tor in late February, Buckell’s latest is an ecothriller set in a near future where: “Global warming has transformed the Earth, and it’s about to get even hotter. The Arctic Ice Cap has all but melted, and the international community is racing desperately to claim the massive amounts of oil beneath the newly accessible ocean.” Read by Carolyn Michelle Smith for Audible Frontiers, the audiobook for Arctic Rising comes in at just under 9 hours. It’s my first audiobook from narrator Smith, who thus far (I’m a little more than a third of the way through) has done a very solid job on the mainline narration and for the Nigerian lead, though her Russian and Inuit accents require a little more imagination, and she’s been quite clear and easily distinguishable with several voices for both male and female characters. It’s not my first fiction from Buckell, though it’ll be my longest story of his, after his novellas in both of the METAtropolis anthologies and The Executioness, and a very long list of short stories of his I’ve enjoyed. 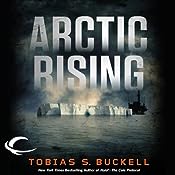 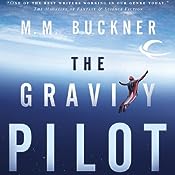 THE GRAVITY PILOT: Out in hardcover from Tor in March 2011, The Gravity Pilot By M. M. Buckner is Narrated by Jay Snyder for Audible Frontiers. Coming in at 11.5 hours, it’s a title I have been looking for in audio for about a year, and I’m ecstatic that Snyder (among other titles: The Caryatids and Blood of Ambrose) was cast. “It is the polluted and gritty future, saved – sort of – by technofixes. Young skydiver Orr Sitka wants no more from life in future Alaska than he already has: a woman he loves and the chance to dive. When he makes a reckless, record-breaking jump that catapults him into celebrity, he’s courted by corporations that want to exploit his talent to make him a sports media star. The dangerous jump that wins Orr infamy turns out to be a breaking point for his loving girlfriend, Dyce, who is wooed away by a promising job in the thriving underground city of Seattle, a world media center in a crumbling civilization. Separately, Orr and Dyce are sucked into nightmare lives that take a terrible toll on each of them. When Orr learns that Dyce has become addicted to virtual reality, controlled by an eccentric media billionaire and his decadent daughter, he does everything in his power to rescue her. But is Orr strong enough to get through to Dyce and break them both out of hell?”

EARLIER THIS WEEK:
MISSING IN ACTION: