Interview: Brandon Sanderson on (primarily) The Alloy of Law and narrator Michael Kramer 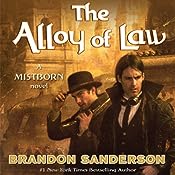 I first met and spoke to Sanderson in September 2010, when he came to Raleigh’s Quail Ridge Books for a reading and signing event for The Way of Kings: Book One of The Stormlight Archive, and one of the topics we got onto happened to be audiobooks. Fast forward to the fall of 2011 and the release of The Alloy of Law: A Mistborn Novel (which I reviewed here on the Audible SF/F blog) and it felt like it was time to dig a little deeper on the subject of audiobooks, narrator Michael Kramer, and (maybe) see about poking around on the ending to the Wheel of Time, due out in January 2013.

Q: Last time we spoke, we were talking about the 45-hour audiobook for The Way of Kings. Each of the Mistborn books came in at 25-30 hours, but The Alloy of Law comes in at a tidy 9 discs. Did you set out to write a shorter book?

A: I knew I wanted to do more in the Mistborn world, and for a long time I played with writing a short story. The short story that I tried to write didn’t work; I tossed it aside after maybe a thousand words, and began working on a different story. I can usually judge what the length of a story will be, and I knew this one would be longer, but I wasn’t sure how long I would want it to be, or whether I should make it a full-blown novel. So I wrote what turned out to be three or four chapters’ worth, and at that point I decided, it was a big enough story to can make a novel of it. I knew it wasn’t going to be the same length as the original Mistborn books, but I felt okay with that, because for a long time I’ve been wanting to start writing some—I don’t want to say shorter, but quicker, faster-paced stories; thrilleresque, maybe a little more pulpish. I just think of it as a fun book, that doesn’t require quite as much of an investment of time and energy for the reader as something like The Way of Kings—which I love, but I want to be doing a variety of things. So writing a shorter book was intentional, but I kind of slipped into it.

Q: How much did you focus on writing The Alloy of Law as a starting point for readers who were new to Mistborn? Was it hard to balance writing for new readers versus wanting to give your existing readers a “welcome home”?

A: It takes place hundreds of years after the trilogy, so there was enough that I had to bring longtime readers up to speed on that it felt very natural to write the book as a potential new starting point, just because the world had been updated so much.

That said, I did make sure to slip in lots of fun things for those who had read the original trilogy, that are callbacks or that show how the world got updated and how it grew. I was conscious of the book possibly being a new starting point, but it’s more that it felt natural for what the story required, as opposed to me sitting down and trying to force the book to be a new starting point.

Q: Wayne’s ability to mimic and create accents is used to great effect in the book, and Michael Kramer really shines in bringing these accents to life in the audiobook. Did you have a sense when writing the book that these could be challenging — and rewarding — scenes when read?

A: I certainly did. The thing is, I’m not good with talking in accents myself—I can hear them in my head, but I’m atrocious at trying to do them. So while I was writing the book, I was thinking in the back of my mind, “I really hope that poor Michael can pull this off.” It was a lot of fun to write Wayne’s accents. I’m writing in a world that isn’t our world, but the Mistborn world is a bit of an Earth analogue. I intentionally used themes that make it an Earth parallel, which is different from my other worlds. So you can have a character who kind of has a light Cockney accent or something like that, but it’s not our world so it can’t exactly mimic that accent. So it’s already a challenge in that respect. I do think Michael did a fantastic job.

Q: A lot happens before this book opens — how did you pick an opening for Wax’s story, leaving so much of the backstory with Wayne (and others) to be picked up and absorbed on the fly?

A: I usually like to start my books in medias res to an extent. It brings across the sense that I want to portray, which is that the characters all existed before the book started, and the characters continue—those who survive—to exist after the book ends. That helps with the sense of immersion. Granted, each book tells about a very important chapter of the characters’ lives, and there’s a distinct beginning, middle, and end to that chapter, but if the beginning or end are too hard and fast, it feels contrived to me. So I do this with all of my books.

It’s usually harder to figure out a starting point than you might think. I often have to revise my beginnings very heavily. This is no different from my other works; in the Mistborn books I’ve had to do this often. The prologue for [The Alloy of Law] was actually written to be the prologue to a sequel, and after I wrote it, I thought, “No, that needs to go in this book.” We did a lot of shuffling around at the beginning of this book to find the right starting point.

Q: What are your favorite audiobooks? (Or: do you listen to audiobooks?)

A: I listen to audiobooks on occasion, when I’m driving somewhere. The thing is, I don’t drive much anymore, because I work from home. I do enjoy audiobooks, but I like to listen to them when I’m doing something else. I really enjoyed the Harry Potter audiobooks—I thought those were very good. I like Michael Kramer and Kate Reading’s interpretation of the Wheel of Time. But I am not as much an audiobook junkie as some people would be, because I don’t go anywhere. Most people I’ve known who listen to a lot of audiobooks like to do it while they’re commuting or something like that.

Q: Something which just occurred to me was that, other than editors, advance reviewers, etc. the first people who will get their hands on the conclusion to The Wheel of Time will be the audiobook narrators — including Kramer, who has been a constant voice in the series. You’ve written that the final words in the series are Robert Jordan’s — can you give away whether the final voice on the audiobook might be Kramer’s?

A: Ha! I can’t give you something like that. I’m sorry. Nice try, though.

Q: Michael Kramer is, other than Elantris (Jack Garrett), Warbreaker (James Yaegashi), and the Alcatraz series (Ramon de Ocampo), “the voice of Brandon Sanderson” when it comes to audiobooks, handling narration on The Wheel of Time, the Mistborn trilogy, The Way of Kings, and now The Alloy of Law. What makes him such a well-suited narrator for your books?

A: I feel there’s a fine line to walk between performing too much and not enough. When I like to listen to an audiobook, I don’t want to hear just a dry read. I like a subtle shift in character voice and tone when someone is speaking, so that you can get a sense of it. But I don’t like it performed so much—particularly for my own works—that it takes you out of the story. Having listened to the Wheel of Time audiobooks, as that is one of the main series I’ve listened to in my life, I really wanted Michael Kramer for some of my works. So I asked for him by name.

Sanderson’s latest audiobooks are the just-released books 2 and 3 in his middle grade Alcatraz series:

This entry was posted in regular and tagged brandon sanderson, interviews, michael kramer, the alloy of law. Bookmark the permalink.