The release week for Tuesday, April 3 is led by the release of Triggers By Robert J. Sawyer, Narrated by Jeff Woodman for Audible Frontiers: ”On the eve of a secret military operation, an assassin’s bullet strikes President Seth Jerrison. He is rushed to the hospital, where surgeons struggle to save his life. At the same hospital, researcher Dr. Ranjip Singh is experimenting with a device that can erase traumatic memories. Then a terrorist bomb detonates. In the operating room, the president suffers cardiac arrest. He has a near-death experience – but the memories that flash through Jerrison’s mind are not his memories. It quickly becomes clear that the electromagnetic pulse generated by the bomb amplified and scrambled Dr. Singh’s equipment, allowing a random group of people to access one another’s minds.”  Joining Triggers are four more novels from Sawyer’s backlist: Illegal Alien, Mindscan, Frameshift, and Factoring Humanity. 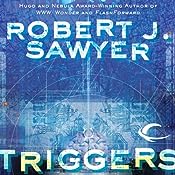 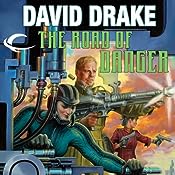 Also new Tuesday is The Road of Danger: RCN Series, Book 9 By David Drake, Narrated by Victor Bevine, who has been the constant voice of Drake’s RCN series, also for Audible Frontiers: ”Captain Daniel Leary with his friend–and spy–Officer Adele Mundy are sent to a quiet sector to carry out an easy task: helping the local admiral put down a coup before it takes place.”

Out Monday was A Short, Sharp Shock By Kim Stanley Robinson, Narrated by Paul Michael Garcia for Blackstone Audio — 4 hrs and 18 mins — “A man tumbles through wild surf, half drowned, to collapse on a moonlit beach. When he regains consciousness, he has no memory of who he is or where he came from. He knows only that the woman who washed ashore with him has disappeared sometime in the night and that he has awakened in a surreal landscape of savage beauty—a mysterious watery world encircled by a thin spine of land.” 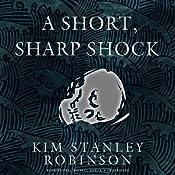 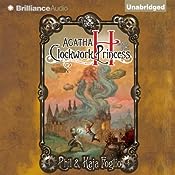 And out on Saturday was Agatha H. and the Clockwork Princess: A Girl Genius Novel, Book 2 By Phil and Kaja Foglio, Narrated by Angela Dawe for Brilliance Audio — “In a time when the Industrial Revolution has escalated into all-out warfare, Mad Science rules the world… with mixed success.  With the help of Krosp, Emperor of All Cats, Agatha has escaped from the massive airship known as Castle Wulfenbach. After crashing their escape dirigible, Agatha and Krosp fall in with Master Payne’s Circus of Adventure, a traveling troupe of performers dedicated to staging Heterodyne shows – dramatizations of the exploits of Bill and Barry Heterodyne and their allies – who are unaware of Agatha’s connection to the Heterodyne line.”