Another bumper crop of releases this week, ranging from Steampunk alternate history vampires, to vampires in a remote northern Ontario mining town, to a shared world urban fantasy anthology, to the 56 hours that is David Foster Wallace’s Infinite Jest, a literary post apocalypse, a revisionary approach to the Three Wise Men, and more. 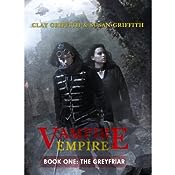 Vampire Empire – The Greyfriar By Clay and Susan Griffith, Narrated by James Marsters for Buzzy Multimedia Publishing (10 hrs and 39 mins):

“1870. A time known as The Great Killing. The vampire clans arose and slaughtered humanity with unprecedented carnage in the northern parts of the world. Millions perished; millions were turned into herd animals. The great industrialized civilizations of the world were left in ruin. A remnant fled south to the safety of the ever present heat which was intolerable to vampires. There, blending with the local peoples, they rebuilt their societies founded on human ingenuity, steam and iron. The year now is 2020. The Equatorian Empire, descendant of the British Empire, stretches from Alexandria to Cape Town. Princess Adele, quick witted, combat trained and heir to throne is set to wed the scion of the American Republic, a man she has never met. Their marriage will cement an alliance between the nations and set the stage for war against the vampires in an attempt to retake the north. Prepared to do her duty she finds herself caught in a web of political intrigue and physical danger.

The Greyfriar, a legendary vampire hunter from the north, appears ready to rescue the Princess and return her home—but he harbors secrets of his own. As the power struggle between the vampires and humans increase Adele and The Greyfriar are caught in the middle, on the run, being hunted, and fighting for not just their own lives, but for future of humanity.”

Originally published in print by Pyr in 2010, this is a long, long-awaited audiobook for me, the past year being the longest since Marsters was announced as narrator. Marsters, whose television roles include Spike on “Buffy the Vampire Slayer” and “Angel”, was the long-time voice of Jim Butcher’s The Dresden Files series for Buzzy Multimedia. Now Marsters is booked to continue the Vampire Empire series with two more books: 2011’s The Rift Walker and 2012’s The Kingmakers, due out in print this fall. The first audiobook, The Greyfriar, “breathes new life into the Vampire subgenre” according to The Guilded Earlobe; I can hardly wait to jump in.

Bordertown: a city on the Border between the human world and the elfin realm. A place where neither magic nor technology can be counted on, where elf and human kids run away to find themselves.

The Way from our world to the Border has been blocked for 13 long years. Now the Way is open once again—and Bordertown welcomes a new set of seekers and dreamers, misfits and makers, to taste life on the Border.

Originally published in print by Tor last year, Tor.com has a brief introduction with links to more information on the shared world of Bordertown. 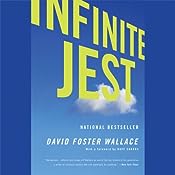 A gargantuan, mind-altering comedy about the Pursuit of Happiness in America set in an addicts’ halfway house and a tennis academy, and featuring the most endearingly screwed-up family to come along in recent fiction, Infinite Jest explores essential questions about what entertainment is and why it has come to so dominate our lives; about how our desire for entertainment affects our need to connect with other people; and about what the pleasures we choose say about who we are.

Equal parts philosophical quest and screwball comedy, Infinite Jest bends every rule of fiction without sacrificing for a moment its own entertainment value. It is an exuberant, uniquely American exploration of the passions that make us human – and one of those rare books that renew the idea of what a novel can do.

How to describe this “novel”… OK. It’s DFW’s 1996 novel, considered among the greatest English-language novels ever written. In audio, it’s 56 hours and 14 minutes long. That’s about all I have, though Jon Korn at LitReactor tries a little harder when he classifies it as sf. Lastly: “Please note: When you purchase this title, the accompanying reference material will be available in your My Library section along with the audio.” These are likely the (significant) end-notes, with their own footnotes. But I don’t know for sure, and am not quite ready to drop the 2 credits to find out. I need to date the sample a bit longer before committing to 56 hours.

ALREADY OUT WEDNESDAY:
LATER THIS WEEK: