It’s quite a release week in the Teen SF/F category, led by my overall pick for the week, The Drowned Cities By Paolo Bacigalupi, Narrated by Joshua Swanson. It’s the second in Bacigalupi’s Ship Breaker series, a post-oil-crash world, out concurrently with the print/e-book edition from Little, Brown Books for Young Readers. Along with all of my picks for this week, it’s in the 10-12 hour range, a length I am becoming more and more happy with. 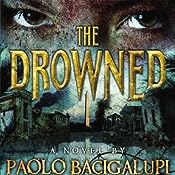 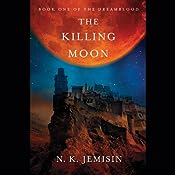 Outside of YA, and also out concurrently with its print/e-book release (Orbit in this case) is The Killing Moon: Dreamblood, Book 1 By N. K. Jemisin, Narrated by Sarah Zimmerman for Hachette Audio; it begins a new duology for Jemisin after her well-regarded Inheritance Trilogy (The Hundred Thousand Kingdoms, The Broken Kingdoms, and The Kingdom of the Gods). No worries about a long wait for the sequel to The Killing Moon, as The Shadowed Sun (Dreamblood, #2)  is due in just a month.

It’s also a good release week for Angry Robot on Brilliance Audio, bringing several books published earlier in the year to audio. (With samples for all of them handily available here.) The first of the two which most grab my eye this week is Empire State: A Novel By Adam Christopher, Narrated by Phil Gigante. “It’s a parallel-universe, Prohibition-era world of mooks and shamuses that is the twisted magic mirror to our bustling Big Apple. It’s a city where sinister characters lurk around every corner while the great superheroes who once kept the streets safe have fallen into deadly rivalries and feuds. Not that its colourful residents know anything about the real New York…until detective Rad Bradley makes a discovery that will change the lives of all its inhabitants.” [Big Idea link.] 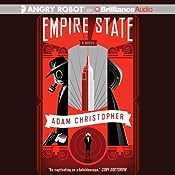 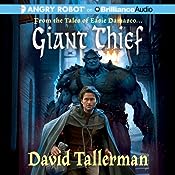 The second such title I want to mention is Giant Thief: Tales of Easie Damasco, Book 1 By David Tallerman, Narrated by James Langton. “Meet Easie Damasco: rogue, thieving swine, and total charmer.Even the wicked can’t rest when a vicious warlord and the force of enslaved giants he commands invade their homeland. Damasco might get away in one piece, but he’s going to need help. Big time.” Adrian Tchaikovsky calls it “A fast-paced, witty and original fantasy, reminiscent of Scott Lynch and Fritz Leiber.” Having read both Lynch and Leiber, I’m looking forward to finally reading Tallerman’s debut novel, after having read several (and even published one!) of his short stories.

Also newly out in audio this week is Range of Ghosts: The Eternal Sky, Book 1 By Elizabeth Bear, Narrated by Celeste Ciulla for Recorded Books. Out in late March in print and e-book (Tor), it is pitched as: “In a world where wizards are unable to procreate, Temur, heir to his empire’s throne, flees to avoid assassination. Once-Princess Samarkar, formerly heir to her own empire’s throne, gives up everything to seek the wizards’ magical power. Drawn together by fate, Temur and the Once-Princess must stand against a cult inciting strife and civil war in all the empires.” Over on Scalzi’s Whatever blog, Bear explains a bit more of the Big Idea behind the novel.