The absolutely mammoth release week for Tuesday, May 23, is led for me by the much-anticipated and well-regarded 2312 by Kim Stanley Robinson, narrated by Sarah Zimmerman for Hachette Audio, out concurrently with its publication in hardcover and e-book by Orbit. At 19 hrs and 15 mins, it seems a pretty good length for exploring a science fiction world (not too long, not too short). Over on Scalzi’s Whatever blog, Robinson talks about the Big Idea behind the novel, there’s an official site which lets you build your own asteroid terrarium, and here’s the publisher description: “The year is 2312. Scientific and technological advances have opened gateways to an extraordinary future. Earth is no longer humanity’s only home; new habitats have been created throughout the solar system on moons, planets, and in between. But in this year, 2312, a sequence of events will force humanity to confront its past, its present, and its future. The first event takes place on Mercury, on the city of Terminator, itself a miracle of engineering on an unprecedented scale. It is an unexpected death, but one that might have been foreseen. For Swan Er Hong, it is an event that will change her life. Swan was once a woman who designed worlds. Now she will be led into a plot to destroy them.” 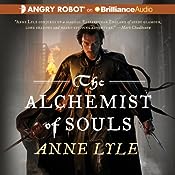 The Alchemist of Souls: Night’s Masque, Book 1 By Anne Lyle, Narrated by Michael Page for Angry Robot on Brilliance Audio — Length:15 hrs and 9 mins — Out just a bit earlier this year in print and e-book, read by Page, the narrator of the (deservedly) award-winning audiobook for Scott Lynch’s The Lies of Locke Lamora. Again, there’s a Big Idea piece from the author, and here’s the publisher: “When Tudor explorers returned from the New World, they brought back a name out of half-forgotten Viking legend: skraylings. Red-sailed ships followed in the explorers’ wake, bringing Native American goods – and a skrayling ambassador – to London. But what do these seemingly magical beings really want in Elizabeth I’s capital? Mal Catlyn, a down-at-heel swordsman, is appointed to the ambassador’s bodyguard, but assassination attempts are the least of his problems. What he learns about the skraylings and their unholy powers could cost England her new ally – and Mal his soul.”

Seed (2011) By Rob Ziegler, Narrated by Nicola Barber for Audible Frontiers — Length:12 hrs and 45 mins. Seed is Ziegler’s debut novel: “It”s the dawn of the 22nd century, and the world has fallen apart. Decades of war and resource depletion have toppled governments. The ecosystem has collapsed. A new dust bowl sweeps the American West. The United States has become a nation of migrants – starving masses of nomads who seek out a living in desert wastelands and encampments outside government seed-distribution warehouses. In this new world, there is a new power. Satori is more than just a corporation, she is an intelligent, living city that grew out of the ruins of Denver. …” 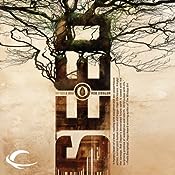 Out last Wednesday from Recorded Books was All Men of Genius (2011) By Lev AC Rosen, Narrated by Emily Gray — Length:16 hrs and 57 mins — “Set in a steampunk version of Victorian England, Lev AC Rosen’s acclaimed debut novel, All Men of Genius, follows the fantastical adventures of Violet Adams. Determined to attend the prestigious Illyria College, Violet gains entrance by masquerading as her twin brother Ashton. But continuing the scheme turns out to be difficult – especially when “Ashton” is faced with blackmail, killer automata, and possible romance with a young duke.”

And continuing its almost weekly march upon bigtime backlists, Audible Frontiers this week brings us a wide selection of the works of science fiction author David Brin, in the run-up to Brin’s forthcoming Existence (June 17). The post-apocalyptic 1985 novel The Postman, which indeed spawned the Mel Gibson film, is narrated by David LeDoux: 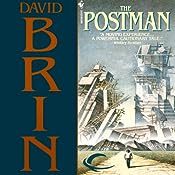 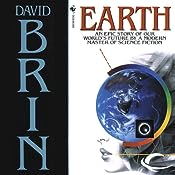 Also new in audio are: Earth (1990 Narrated by David DeVries and Kristin Calbley), Kiln People (2002) and The Practice Effect (1984, Narrated by Andy Caploe), and Glory Season (1993, Narrated by Claire Christie). 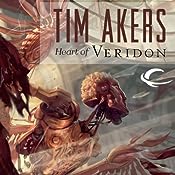 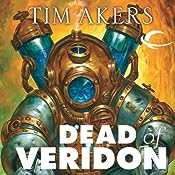 And continuing with Dead of Veridon: Burn Cycle, Book 2 (2011) — 9.5 hours each, these novels follow “Jacob Burn: pilot, criminal and disgraced son of one of the founding families of the ancient city of Veridon.”