The first release week for June 2012 is led by the sf meta-comedic Redshirts: A Novel with Three Codas By John Scalzi, Narrated by Wil Wheaton for Audible, out concurrently with the print and (DRM-free!) e-book release from Tor. At 7 hours and 41 minutes it sounds a bit slight, but Wheaton is not your typical plodding-along narrator. The book re-unites the author/narrator duo behind Fuzzy Nation (which was just honored with an Audie Award), Agent to the Stars, and The Android’s Dream, and certainly seems another pitch-perfect casting for Wheaton after his wonderful turn at the helm of the 80s pop culture romp that was last year’s sf debut novel Ready Player One by Ernest Cline. The set-up? The “redshirts” — starship away mission cannon-fodder — start to figure out that their casualty rate is startling high. There’s a theme song by Jonathan Coulton (covered by Scalzi on ukulele and elsewhere made into a fan video) and sample chapters are afoot as well. 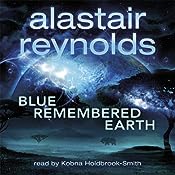 Fitting in between Kim Stanley Robinson’s excellent 2312 (out last week) and David Brin’s Existence (later in June) and making for a trio of big-time summer big-idea sf novels is Blue Remembered Earth by Alastair Reynolds, narrated by Kobna Holdbrook-Smith for Recorded Books. A meaty 21 hrs and 44 mins, this is the same narration which was published concurrent with the UK print release in the UK in mid-January from Orion Publishing Group, now out in the US concurrent with the US print release from Ace Hardcover: “One hundred and fifty years from now, in a world where Africa is the dominant technological and economic power, and where crime, war, disease, and poverty have been banished to history, Geoffrey Akinya wants only one thing: to be left in peace, so that he can continue his studies into the elephants of the Amboseli basin.”

Amped: A Novel By Daniel H. Wilson, Narrated by Robbie Daymond for Recorded Books, concurrent with the print release from Doubleday. A taught 8 hrs and 42 mins, Amped is a new sf/thriller hybrid from the author of last summer’s Robopocalypse. In Amped we’ll find enhanced humans on the run from new laws meant to curtail their powers: 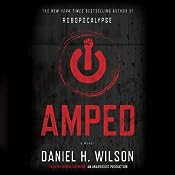 How to Build an Android: The True Story of Philip K. Dick’s Robotic Resurrection By David F. Dufty Narrated By Bronson Pinchot for Blackstone Audio — Length: 7 hrs and 37 mins — An intriguing-looking non-fiction chronicling of “The stranger-than-fiction story of the ingenious creation and loss of an artificially intelligent android of science fiction writer Philip K. Dick.” The head has not yet been recovered. Your theories are welcome.

NEWLY ON THE FURTHER AHEAD RADAR:

The Dirty Streets of Heaven: Volume One of Bobby Dollar by Tad Williams (DAW Hardcover, 4 September 2013) — a new series from Tad Williams!? How have I not known about this all year. My fall needs some extra reading time, though this comes in at “only” 400 pages. (For Williams, this is being brief.)