Rush’s Neil Peart to narrate the Brilliance Audio production of Kevin J. Anderson’s Clockwork Angels: The Novel (based in turn on the Rush album)

Via his blog, author Kevin J. Anderson mentions (among other things) something he’d apparently previously announced:

The hardcover, full-color novel comes out from ECW on September to coincide with the launch of the Rush Clockwork Angels tour. The unabridged audiobook from Brilliance is narrated by Neil Peart himself.

And, well, that’s not something I’d heard yet. Anderson is also giving away a free booklet preview of the novel: 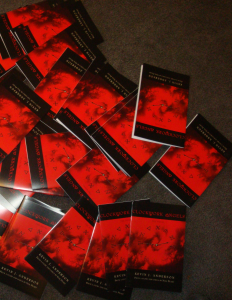 Very interesting… The audiobook listing at Brilliance Audio gives a release date of September 1, and this description: “Rush’s upcoming Album Clockwork Angel tells a story throughout the Album, friend of the Band and major fan Kevin Anderson has spent the last two years working with the band to tell the story their album tells in prose novel form. The story is a young man’s quest to follow his dreams, he is caught between the grandiose forces of order and chaos. He travels across a lavish and colorful world of steampunk and alchemy, with lost cities, pirates, anarchists, exotic carnivals, and a rigid Watchmaker who imposes precision on every aspect of daily life.”