The release week for Tuesday, July 24 brings quite a few titles I’m very interested in. Luckily, two of the audiobooks I’ve most got my eyes on are on the shorter side.

Vlad By Carlos Fuentes, translated by Alejandro Branger and Ethan Shaskan Bumas, narrated by Robert Fass for Dreamscape Media (Dalkey Archive Press, 112 pages) — Length: 2 hrs and 41 mins — “Where, Carlos Fuentes asks, is a modern-day vampire to roost? Why not Mexico City, populated by ten million blood sausages (that is, people), and a police force who won’t mind a few disappearances? ‘Vlad’ is Vlad the Impaler, of course, whose mythic cruelty was an inspiration for Bram Stoker’s Dracula. In this sly sequel, Vlad really is undead. More than a postmodern riff on “the vampire craze”, Vlad is also an anatomy of the Mexican bourgeoisie, as well as our culture’s ways of dealing with death. For – as in Dracula – Vlad has need of both a lawyer and a real-estate agent in order to establish his new kingdom, and Yves Navarro and his wife Asuncion fit the bill nicely. Having recently lost a son, might they not welcome the chance to see their remaining child live forever? More importantly, are the pleasures of middle-class life enough to keep one from joining the legions of the damned?” 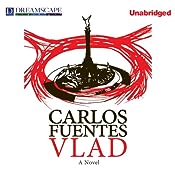 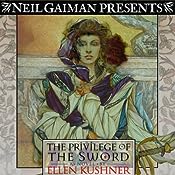 The Privilege of the Sword By Ellen Kushner, Narrated by Ellen Kushner, Barbara Rosenblat, Felicia Day, Joe Hurley, Katherine Kellgren, Nick Sullivan, and Neil Gaiman for Neil Gaiman Presents — Length:15 hrs and 40 mins — won the 2007 Locus Award for Best Fantasy Novel — “A few words from Neil on Privilege of the Sword: Life hands us so many moments when we hover between who we were raised to be, who the people around us are trying to make us, and who we are trying to become. In Katherine’s case, that means encountering a range of people and behaviors her mother never prepared her for – including some shocking acts of violence, both physical and emotional. As one of Kushner’s most charming characters, an actress known as “The Black Rose”, sighs, “It’s all so very difficult, until you get the hang of it.”” Here The Privilege of the Sword is another “illuminated” production, with Kushner’s narration accompanied by a full cast, as was the case for fellow World of Riverside novel Swordspoint: A Melodrama of Manners. 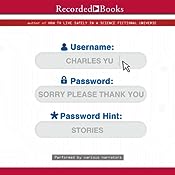 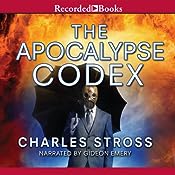 And just out today (Wednesday July 25) is The Apocalypse Codex By Charles Stross, Narrated by Gideon Emery for Recorded Books — Length:11 hrs and 55 mins — “The winner of multiple Hugo Awards, Charles Stross is one of the most highly regarded science fiction writers of his time. In The Apocalypse Codex, occasionally hapless British agent Bob Howard tackles a case involving an American televangelist and a supernatural threat of global proportions.”