The last Tuesday of September brings a sizable haul of interesting-looking audiobooks, from new sequels, to some of 2011’s most missing, new Terry Pratchett, and the return of Neil Gaiman Presents.

The Mongoliad: The Foreworld Saga, Book 2 By Neal Stephenson, Greg Bear, Mark Teppo, Nicole Galland, Erik Bear, Joseph Brassey, and Cooper Moo comes with quite a busy byline from Brilliance Audio, but once again it’s one narrator, Luke Daniels, who handles the dozens of accents and handful of storylines as the story picks up where it ended in Book One, the aftermath of the Mongolian invasion of Europe, 1241. Can’t get enough Foreworld? There’s also a 1.5 hour short, Dreamer: A Prequel to the Mongoliad, By Mark Teppo with, of course, Daniels at the helm. 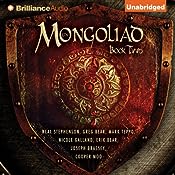 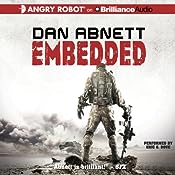 2011 saw two strong entries in a very specific subgenre. TC McCarthy’s Germline ended up one of my favorites of the year last year, and now Embedded by Dan Abnett, narrated by Eric G. Dove for Angry Robot on Brilliance Audio, gives listeners another look at an embedded journalist in a military sf storyline. Where Germline focused on a near-future resource war in South Asia, Abnett takes a look at both a more distant future and setting, as well as a double meaning for ‘embedded’, as his journalist has himself ‘chipped inside the head of a combat veteran’ in a battlezone on a remote colony planet.

Small Beer Press published Delia Sherman’s The Freedom Maze late in 2011, and this book for young adults went on to win Norton, Prometheus, and Mythopoetic Awards, as well as be named one of Kirkus Review’s best of 2011, and be selected onto the Tiptree Honor Award List. Now it’s in audio, narrated by Robin Miles for Listening Library. “Set against the burgeoning Civil Rights movement of the 1960s, and then just before the outbreak of the Civil War, The Freedom Maze explores both political and personal liberation, and how the two intertwine. In 1960, thirteen-year-old Sophie isn’t happy about spending summer at her grandmother’s old house in the Bayou. But the house has a maze Sophie can’t resist exploring once she finds it has a secretive and playful inhabitant. When Sophie, bored and lonely, makes an impulsive wish inspired by her reading, hoping for a fantasy adventure of her own, she slips one hundred years into the past, to the year 1860. On her arrival she makes her way, bedraggled and tanned, to what will one day be her grandmother’s house, where she is at once mistaken for a slave.” 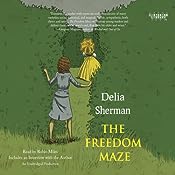 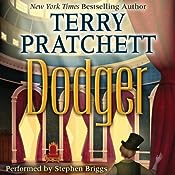 Another teen audiobook release this week is Dodger By Terry Pratchett. Read by frequent Pratchett narrator  Stephen Briggs for Harper Audio, the book sees Pratchett turn his attention and wit to a street urchin in Dickensian London: “A storm. Rain-lashed city streets. A flash of lightning. A scruffy lad sees a girl leap desperately from a horse-drawn carriage in a vain attempt to escape her captors. Can the lad stand by and let her be caught again? Of course not, because he’s…Dodger. Seventeen-year-old Dodger may be a street urchin, but he gleans a living from London’s sewers, and he knows a jewel when he sees one. He’s not about to let anything happen to the unknown girl – not even if her fate impacts some of the most powerful people in England. From Dodger’s encounter with the mad barber Sweeney Todd to his meetings with the great writer Charles Dickens and the calculating politician Benjamin Disraeli, history and fantasy intertwine in a breathtaking account of adventure and mystery. Beloved and best-selling author Sir Terry Pratchett combines high comedy with deep wisdom in this tale of an unexpected coming-of-age and one remarkable boy’s rise in a complex and fascinating world.”

One of my “regrets” in 2011 was not making time for Colin Meloy’s Wildwood, a middle grade novel billed as an “American Narnia”. Now Meloy is back with a sequel, Under Wildwood, under his own narration for Harper Audio. At 13 hrs and 20 mins, it’s the longest audiobook mentioned so far in this post, though it’s aimed at the youngest listeners of the bunch. Who says kids these days don’t have attention spans? 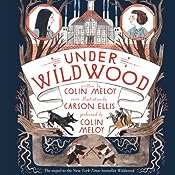 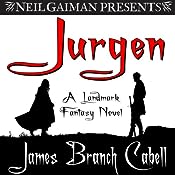 Neil Gaiman Presents returns this week with three novels by 1920s literary satiric fantasist James Branch Cabell, all narrated by Robert Blumenfeld: Jurgen, The High Place, and Figures of Earth: A Comedy of Appearances. “A few words from Neil on Jurgen: Jurgen may be the most famous of James Branch Cabell’s books: It was certainly the one that put him on the map, when, in January 1920, the New York Society for the Prevention of Vice took his publisher to court for violating New York’s anti-obscenity law. Suddenly, Cabell went from an admired but semi-obscure author of literary satiric fantasy, to the guy everyone was reading because he was censored.”

JUST ADDED TO THE LONG-RANGE CALENDAR:

Brimstone Angels: Lesser Evils: A Forgotten Realms Novel by Erin M. Evans (Dec 4, Wizards of the Coast) — “Well, I’m now behind on my own writing, because I couldn’t tear myself away from Lesser Evils. Then again, I’m only behind by a single day—because I really couldn’t tear myself away from Lesser Evils. If the next one’s not out until tomorrow, it’s still too far off. And if Evans is not already a name spoken of as part of the true Forgotten Realms pantheon, along with Kemp, Cunningham, and Salvatore, it can only be because she has fewer books out, and thus hasn’t reached everyone yet.” — Ari Marmell