It feels like I just wrapped up a huge release week post two days ago, because I did. But so much has already come out since Wednesday that, well, I’d better post now because next week should have a huge list of new audiobooks as well. So here’s an “interlude” release week post.

Leading the list is the Peter Grant series by Ben Aaronovitch, all narrated by Kobna Holdbrook-Smith for Tantor Audio. The three books, Midnight Riot: Peter Grant, Book 1, Moon Over Soho: Peter Grant, Book 2, and Whispers Under Ground: Peter Grant, Book 3, concern London constable (and eventual sorcerer’s apprentice) Peter Grant whose “ability to speak with the lingering dead” sees him plucked from a paper-pushing assignment and “plunged into a world where gods and goddesses mingle with mortals and a long-dead evil is making a comeback on a rising tide of magic.” 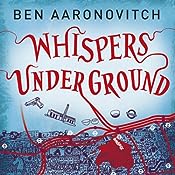 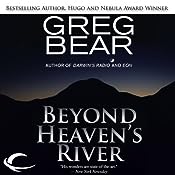 Also out Friday is 6-pack of audiobooks by Greg Bear, all out from Audible Frontiers. They are: Beyond Heaven’s River, Strength of Stones, and Hardfought (Narrated by Ray Chase), Psychlone (Narrated by William Roberts), Dinosaur Summer (Narrated by Dave Courvoisier), and Slant (Narrated by Christine Williams).

Grimm Tales for Young and Old By Philip Pullman, Narrated by Samuel West for AudioGO — Length: 10 hrs and 23 mins — “In this enchanting selection of fairy tales, award-winning author Philip Pullman presents his 50 favourite stories from the Brothers Grimm in a ‘clear as water’ retelling, making them feel fresh and unfamiliar with his dark, distinctive voice.” 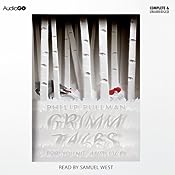 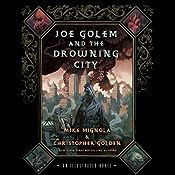 Joe Golem and the Drowning City By Mike Mignola and Christopher Golden, Narrated by Robert Fass for Macmillan Audio — Length: 8 hrs and 12 mins — “In 1925, earthquakes and a rising sea level left Lower Manhattan submerged under more than 30 feet of water, so that its residents began to call it the Drowning City. Those unwilling to abandon their homes created a new life on streets turned to canals and in buildings whose first three stories were underwater. Fifty years have passed since then, and the Drowning City is full of scavengers and water rats, poor people trying to eke out an existence, and those too proud or stubborn to be defeated by circumstance. Among them are 14-year-old Molly McHugh and her friend and employer, Felix Orlov. Once upon a time Orlov the Conjuror was a celebrated stage magician, but now he is an old man, a psychic medium, contacting the spirits of the departed for the grieving loved ones left behind. When a séance goes horribly wrong, Felix Orlov is abducted by strange men wearing gas masks and rubber suits, and Molly soon finds herself on the run. Her flight will lead her into the company of a mysterious man, and his stalwart sidekick, Joe Golem, whose own past is a mystery to him, but who walks his own dreams as a man of stone and clay, brought to life for the sole purpose of hunting witches.”

And Thursday saw the years-anticipated release of J. K. Rowling’s first novel for adults, The Casual Vacancy, narrated by Tom Hollander for Hachette Audio at nearly 18 hours. With no magic or boy wizards in sight, it’s still already topping Audible’s weekly best-seller charts. (With just two days of sales so far.) “When Barry Fairbrother dies unexpectedly in his early forties, the little town of Pagford is left in shock. Pagford is, seemingly, an English idyll, with a cobbled market square and an ancient abbey, but what lies behind the pretty façade is a town at war. Rich at war with poor, teenagers at war with their parents, wives at war with their husbands, teachers at war with their pupils…. Pagford is not what it first seems. And the empty seat left by Barry on the town’s council soon becomes the catalyst for the biggest war the town has yet seen.” There have been some good reviews, and some quite bad ones; one which intrigues me the most is by Lev Grossman for TIME, who (elsewhere) calls it “a triumph”. Hm… 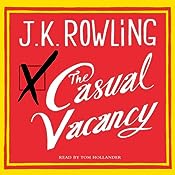 ALSO OUT SINCE WEDNESDAY: