November gets off to a big start, with a long list of noteworthy releases, four of which I’ll highlight at a little more length, and several more worth checking out as well. (Meanwhile, my “most missing” this fairly busy week is Allen Steele’s Apollo’s Outcasts, out in hardcover and ebook from Pyr.)

The Creative Fire: Book One of Ruby’s Song By Brenda Cooper, Narrated by Yetta Gottesman for Audible Frontiers — Length: 13 hrs and 27 mins. Out in print and ebook from Pyr, it’s a book I was very excited to see announced for audio: “Ruby Martin expects to spend her days repairing robots while avoiding the dangerous peacekeeping forces that roam the corridors of the generation ship the Creative Fire. The social structure of the ship is rigidly divided, with Ruby and her friends on the bottom. Then a ship-wide accident gives Ruby a chance to fight for the freedom she craves. Her enemies are numerous, well armed, and knowledgeable. Her weapons are a fabulous voice, a quick mind, and a deep stubbornness. Complicating it all—an unreliable AI and an enigmatic man she met—and kissed—exactly once—who may hold the key to her success. If Ruby can’t transform from a rebellious teen to the leader of a revolution, she and all her friends will lose all say in their future. Like the historical Evita Peron, Ruby rises from the dregs of society to hold incredible popularity and power. Her story is about love and lust and need and a thirst for knowledge and influence so deep that it burns.” 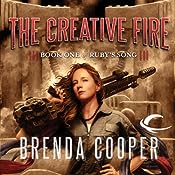 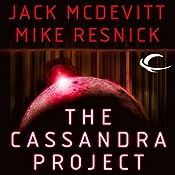 The Cassandra Project By Jack McDevitt and Mike Resnick, Narrated by Brian Holsopple for Audible Frontiers — Length: 11 hrs and 52 mins — On the heels of another double-blockbuster two-author collaboration, Larry Niven and Gregory Benford’s The Bowl of Heaven, “Two science fiction masters—Jack McDevitt and Mike Resnick—team up to deliver a classic thriller in which one man uncovers the secret history of the US space program. Early in his career, Jerry Culpepper could never have been accused of being idealistic. Doing public relations—even for politicians—was strictly business…until he was hired as NASA’s public affairs director and discovered a client he could believe in. Proud of the agency’s history and sure of its destiny, he was thrilled to be a part of its future—a bright era of far-reaching space exploration.But public disinterest and budget cuts changed that future. Now, a half century after the first moon landing, Jerry feels like the only one with stars—and unexplored planets and solar systems—in his eyes. Still, Jerry does his job, trying to drum up interest in the legacy of the agency. Then a 50-year-old secret about the Apollo XI mission is revealed, and he finds himself embroiled in the biggest controversy of the twenty-first century, one that will test his ability—and his willingness—to spin the truth about a conspiracy of reality-altering proportions.”

The Emperor’s Soul By Brandon Sanderson, Narrated by Angela Lin for Recorded Books — Length: 3 hrs and 55 mins — A second novella for Sanderson’s after the even shorter Legion just a bitearlier this year. Here, in print and ebook from Tachyon Publications: “New York Times best-selling author Brandon Sanderson is widely celebrated for his Mistborn Trilogy and contribution to the final three books of Robert Jordan’s Wheel of Time series. In The Emperor’s Soul, a Forger named Shai can copy and re-create any item by using magic to rewrite its history. After being condemned to death for attempting to steal the emperor’s scepter, Shai is given one final chance. She’ ll be allowed to live if she can create a new soul for the emperor, who hovers near death.” 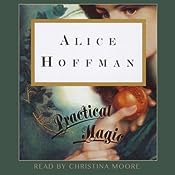 Practical Magic (1995) By Alice Hoffman, Narrated by Christina Moore for Simon & Schuster Audio — Length: 9 hrs and 12 mins — “When the beautiful and precocious sisters Sally and Gillian Owens are orphaned at a young age, they are taken to a small Massachusetts town to be raised by their eccentric aunts, who happen to dwell in the darkest, eeriest house in town. As they become more aware of their aunts’ mysterious and sometimes frightening powers – and as their own powers begin to surface – the sisters grow determined to escape their strange upbringing by blending into “normal” society.”