The Human Division Listen-A-Long, Episode 4: A Voice in the Wilderness 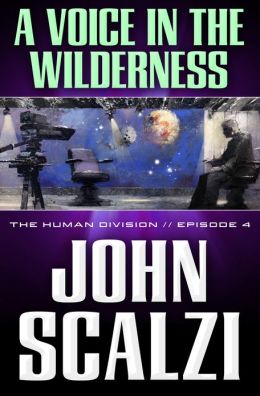 The Human Division, Episode 4: A Voice in the Wilderness
by John Scalzi, read by William Dufris
Length: 49 minutes.

Welcome back to the AudioBookaneers The Human Division Listen-A-Long! This week, we’re discussing episode 4: A Voice In the Wilderness. This is spoiler territory, so if you haven’t listened to the story yet, you may want to go do that.

Usually, I do a little recap before getting into my own thoughts, but today, well, screw that. Today, we’re gonna honor a member of The Human Division who deserves to have his body cloned and turned green, or at least get some kind of honorary coat of jade. This man has a difficult, sometimes thankless job, but he continually handles it with staunch professionalism. Today, we’re here to honor WILLIAM FREAKING DUFRIS with the ZOMG medal of Awesome. Because HOLY SHIT folks, Dufris killed in this week’s episode.

Here’s the thing – Dufris’s narration for this whole series thus far has been absolutely solid. He makes voicing the different characters sound easy (unless, you know, the alien is SUPPOSED to sound like he’s hyperventilating, and then he makes you a bit nervous). And he knows how to work with Scalzi’s prose and nail the pacing of the space operatics, or ratchet up the tension as he did in last week’s cliffhanger of an episode. But something I hadn’t heard Dufris bring before was the full-on funny. And this week, that’s exactly what we got.

I admit, I groaned just a little when inside when I realized we were going to be stepping away from the main narrative again. This is the kind of thing that people complained about all the time on LOST (although oddly, it never bothered me on LOST, because that seemed to be the show’s M.O. – moving from one character to the next every week. I should also admit I’m one of those people who still look back on that show with generally fond memories). But about five minutes in, my concerns had been completely placated. And then about twenty-five minutes in, when Dufris went into that rant of a monologue on air, I was laughing my ass off.

Dufris has done most of Scalzi’s Old Man’s War books, but Scalzi’s more humorous novels have been given to the awesome Wil Wheaton. And while I expect a certain amount of funny or snark in any Scalzi book I’m listening to, I wasn’t expecting a whole chapter of it quite like this. But it was perfection, my friends, both in placement of the story overall (remember last week’s OPEN THE BOX of an ending?). It gave Scalzi the chance to make us laugh after that, while also serving as an important aside, and change-up of pace.

Alfred Birnbaum is a Glen Beck-like radio host (or whatever kind of “radio programs” they have in the future). His shows numbers are dropping, as his assistant Smart (because she is!) continues to tell him. Birnbaum doesn’t seem too worried about letting himself go – he’s banging a groupie on the side, so why not enjoy it while it lasts? Then he meets Michael Washington, who says his clients can make Birnbaum bigger than he ever was before. Washington, however, won’t tell Birnbaum who his clients are. But Washington likens the situation to William Randolph Hearst’s old quote, “You furnish the pictures, and I’ll furnish the war.” Birnbaum can all but see the axe coming down on his show, so he bites. He takes Washington’s offer, and on his show goes into a glorious rant about how evil the Conclave is, and how the CDF has been protecting the earth with blood and the green bodies of patriots. They’re the best thing since free enterprise. To hell with John Perry! (Ohhhhhhh. Dissing John Perry. You know how that makes us feel!) The CDF is where it’s at!

Some poor politico hears Birnbaum’s rant and calls in; Birnbaum rips her apart on the air, and BAM. Birnbaum’s rant goes viral and he’s a national success. He gets so big, they have a rally at the Washington Mall. But just before the rally starts, there’s an attack. Birnbaum is seriously wounded.

He wakes up in the hospital. Michael Washington comes to visit. Then Washington injects Birnbaum with something that shuts down the nervous system, and Birnbaum dies while Washington is monologuing at him (that’s actually pretty brilliant, really). Washington plants the syringe on the corpse, making Birnbaum a martyr.

First off, I laughed so hard when Washington laughed at Birnbaum’s suggestion that there were 100,000 people at the rally, basically calling it BS. Ahahahahahahahahahaha. I also look forward to the futuristic version of the Rally to Restore Sanity and/or Fear

Second, “A voice in the wilderness” is a reference to John the Baptist, who prophesied the coming of Jesus Christ. Also, he got his head cut off before he got to see Christ’s glory – death and resurrection. (See? I’m throwing down Biblical allusions, people. This shit is LOST all over again – and I mean that as a compliment. WE HAVE TO GO BACK, KATE!) Anyway, if Birnbaum is John the Baptist, who is Christ?

The real question here is, who is Michael Washington working for? The CDF seems like the PERFECT answer, because they now have a martyr. Washington gives Birnbaum what I initially thought was a denial of working for the CDF. But then I listened to it again, and it actually sounds like Birnbaum’s giving him a multiple choice quiz. I think we can cross out the Russians and Brazilians. We can probably also cross out the political party that’s not in the White House. Which leaves us either the CDF or a cabal that wants to build a world government. I think you could also guess one of the choices in None of the Above.

One thing I will mention – someone else who complained about John Perry explaining to Earth about the CDF? Liz Egan. Liz Egan, who commanded Abumwe to lie last episode, which unceremoniously ended the diplomatic negotiations last episode. Coincidence?

All that said, this was a thoroughly enjoyable episode. I don’t know if it actually tops last week’s, but it might. It was so different from what came before, and I think that really benefited this story. Nicely done, Mr. Scalzi.

Oh, and Mr. Dufris? I think green really is the color for you.

This entry was posted in The Human Division Listen-a-Long and tagged john scalzi, the human division, william dufris. Bookmark the permalink.

4 Responses to The Human Division Listen-A-Long, Episode 4: A Voice in the Wilderness