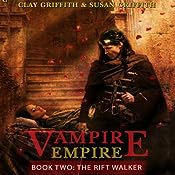 Also available in MP3-CD, The Rift Walker, book two after The Greyfriar in Clay and Susan Griffith’s Vampire Empire trilogy, is a worthy successor in story, narration and production for the Audie-nominated The Greyfriar. As in the first book, James Marsters as a cast of vampires could not be more perfect, and here the production is if anything even cleaner and more crisp. (The only nit-pick narration-wise is the, er, unfortunate pronunciation of “chasm” with a soft “ch”. It had me looking for dictionary entries which favored that pronunciation and… coming up empty.) Story wise, the Griffiths have some intricate political knots to tie and untie and some delicate plot points to navigate between the introductions and other instigations of book one, and the resolutions and other conclusions of book three, The Kingmakers (published in print and ebook last year by Pyr and, hopefully next year, to come to audio from Marsters and Buzzy Multimedia as well). While the summary (below) handles the plot setup quite well, I did want to say a few non-spoilery words about book two.

One of the best signs that you have strong characters on your hands is when it would be very, very convenient for them to do a particular thing, react in a particular way. Under another author, the character may be easily detected as a marionette, with a heavy hand on the strings. But instead, given a bit more freedom of action, they remain true to the character that has been developed and do something that makes things more complicated and risky. There are several instances of this kind of choice in The Rift Walker, and the Griffiths handle events with a light hand. Senator Clark, the American hero of many an anti-vampire campaign, feels the most heavily handled, but never truly played against his reckless “Wild West” feel as a character. In particular, two of the more wonderful supporting characters, Colonel Anhalt and the enigmatic samurai Mamaru, clearly face at least one test of this nature: will they do what might be convenient for the plot, or will they buck against such heavy-handed direction? Both, I’m happy to say, behave as characters, not as plot devices. While I might have a few complaints about some of the plot points — Adele’s incredibly risky gambit to gain refuge in a neighboring country in particular — the book’s pace doesn’t get bogged down in the sometimes messy escalations of a middle book, and the chessboard is heavy with extended pieces in motion as the book concludes, setting up the conclusion, whatever it is that may come.

Anyway, here’s the publisher description of the plot and setup:

“The Rift Walker is the second installment in the Vampire Empire trilogy. Set in a postapocalyptic world, this tale of courage, sacrifice, and heroism takes place against the backdrop of an age of steam and rational humanism, where the social elite have rejected religion and spiritualism as nothing more than quaint superstition. Brutal Vampire Clans rule half the world, keeping human herds for food, and Princess Adele, heir to the throne of Equatoria, is faced with grim choices. War is imminent and her marriage to the odious Senator Clark of America will cement an alliance uniting the Equatorian Empire and the American Republic. This integration of war machines is to be the opening volley in the campaign to reclaim the Northern Hemispheres. Unfortunately, Adele’s betrothed has a bloodthirsty war strategy, one the Princess finds as repulsive as the actions of the vampires they fight.

“Moments in advance of the Princess’s marriage to the Senator, the Greyfriar, legendary champion of the human resistance, rescues Adele before vampire assassins can murder her. While on the run from the agents of Prince Cesare, the acting Clan Lord of the Northern Vampires, Adele seeks to discover a way to protect her beloved Equatoria and prevent the genocide Clark intends to implement, all while trying to free herself from an unwanted marriage. Meanwhile, Cesare’s agents have struck deep at the heart of Equatoria and will stop at nothing to keep Adele from ascending to the throne.

“Treachery abounds; friendship, loyalties, and allegiances are tested. Will Princess Adele be able – with the help of her beloved Greyfriar; her devoted guard and faithful officer, Anhalt; and her mentor, Mamarou – to turn the tide before human civilization is forever shattered?”

This entry was posted in Uncategorized and tagged james marsters. Bookmark the permalink.