Release Week: The Kings and Queens of Roam, Odds Against Tomorrow, Tales of Majipoor, and The Crystal Shard

The Kings and Queens of Roam: A Novel by Daniel Wallace, read by Angela Brazil for AudioGO. Out concurrent with the print/ebook release from Touchstone, it’s the first new novel since 2007 for Wallace, the author of Big Fish. Here it’s a story blending tall tales, folklore, and magical realism in, well, “Wallace”-ian fashion; is the magic “real”? Does it matter if it is? “Helen and Rachel McCallister, who live in a town called Roam, are as different as sisters can be: Helen older, bitter, and conniving; Rachel beautiful, naïve – and blind. When their parents die an untimely death, Rachel has to rely on Helen for everything, but Helen embraces her role in all the wrong ways, convincing Rachel that the world is a dark and dangerous place she couldn’t possibly survive on her own… or so Helen believes, until Rachel makes a surprising choice that turns both their worlds upside down. In this new novel, Southern literary master Daniel Wallace returns to the tradition of tall tales and folklore made memorable in his bestselling Big Fish. The Kings and Queens of Roam is a wildly inventive, beautifully written, and big-hearted tale of family and the ties that bind.” 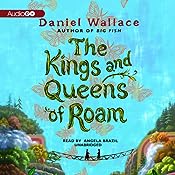 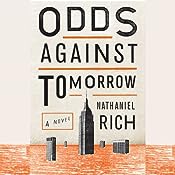 Odds Against Tomorrow By Nathaniel Rich, Narrated By Kirby Heyborne for Tantor Audio. Released a month ago in print/ebook (Farrar, Straus & Giroux, April 2) to quite a bit of coverage. “New York City, the near future: Mitchell Zukor, a gifted young mathematician, is hired by a mysterious new financial consulting firm, FutureWorld. The business operates out of an empty office in the Empire State Building; Mitchell is employee number two. He is asked to calculate worst-case scenarios in the most intricate detail, and his schemes are sold to corporations to indemnify them against any future disasters. This is the cutting edge of corporate irresponsibility, and business is booming. As Mitchell immerses himself in the mathematics of catastrophe – ecological collapse, war games, natural disasters – he becomes obsessed by a culture’s fears.”

Tales of Majipoor by Robert Silverberg, read by Stefan Rudnicki for Blackstone Audio. “Hailed as ‘one of the most fully realized worlds of modern science fiction,'(Booklist) Majipoor is a planet unlike any other, with countless untold stories. Now, available for the first time in one volume, science fiction grand master Robert Silverberg presents seven tales that chronicle thousands of years of Majipoor’s history, from the arrival of the settlers of Old Earth, to the expansion of vast cities, to the extraordinary life of Lord Valentine. Within these stories lie the secrets of Majipoor, a wondrous world of incredible imagination.” 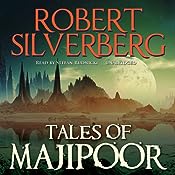 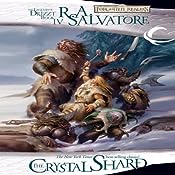 The Crystal Shard: Legend of Drizzt: Icewind Dale Trilogy, Book 1 By R. A. Salvatore, Narrated By Victor Bevine for Audible Frontiers. While several hundred other audiobooks have been added to the Audible Frontiers stash of Dungeons and Dragons titles, including plenty of others in the long-running story of dark elf Drizzt Do’Urden, this is the book which started it all. Not chronologically in terms of Drizzt’s story, but this is the book that introduced Drizzt — and much of the Forgotten Realms setting, not to mention Salvatore himself — to the reading world. “Drizzt Do’Urden has settled in the windswept towns of Icewind Dale. There, he encounters a young barbarian named Wulfgar, captured in a raid and made the ward of a grizzled dwarf name Bruenor. With Drizzt’s help, Wulfgar will grow from a feral child to a man with the heart of a dwarf, the instincts of a savage, and the soul of a hero. But it will take even more than that to defeat the demonic power of Crenshininbon, the fabled Crystal Shard.” Streams of Silver and The Halfling’s Gem are scheduled for two and four weeks later, respectively. 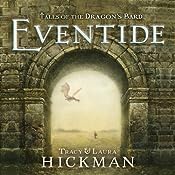 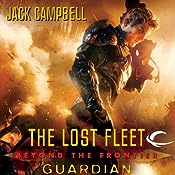 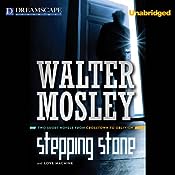 BLACKSTONE AUDIO: Midnight at the Well of Souls By Jack L. Chalker, narrated By Peter Macon; The Caspian Gates by Harry Sidebottom, read by Stefan Rudnicki; The Gentle Giants of Ganymede By James P. Hogan, narrated By John Pruden

RANDOM HOUSE AUDIO: Grimoire of the Lamb: An Iron Druid Chronicles Novella By Kevin Hearne, narrated By Luke Daniels; Into the Void: Star Wars By Tim Lebbon, narrated By January LaVoy (Series: Star Wars: Dawn of the Jedi, Book 1); and (Fiction) A Constellation of Vital Phenomena: A Novel By Anthony Marra, narrated By Colette Whitaker

RECORDED BOOKS: Dead Ever After: A Sookie Stackhouse Novel, Book 13 By Charlaine Harris; and Steel’s Edge By Ilona Andrews (Series: The Edge, Book 4)

CROSSROAD PRESS: Murgunstrumm & Others By Hugh B. Cave, narrated By Michael A. Slusser

HARLEQUIN: Keeper of the Shadows (The Keepers: LA, #3) By Alexandra Sokoloff, narrated By Sandra Michelle

WILDSIDE: The Minikins of Yam By Thomas Burnett Swann

AUDIBLE FRONTIERS: Guardian: The Lost Fleet: Beyond the Frontier, Book 3 By Jack Campbell, Narrated By Christian Rummel; The Gods Return: The Crown of the Isles, Book 3 By David Drake, narrated By Michael Page; Class Dis-Mythed: Myth Adventures, Book 15 By Robert Asprin and Jody Lynn Nye; and quite a few more

This entry was posted in Release Week and tagged daniel wallace, stefan rudnicki. Bookmark the permalink.