JUNE 26-JULY 2, 2013: July is off and running with a first release week to jump-start your summer listening plans. From hard-to-the-point-of-being-nearly-incomprehensible sf (Hannu Rajaniemi’s The Fractal Prince) to a more The Hunger Games esque (with aliens!) book (Melissa Marr’s The Arrivals) to first books in new epic fantasy series (Django Wexler’s The Thousand Names and Anthony Ryan’s Blood Song) to the latest in quite a string of literary authorial takes on sf (Matt Haig’s The Humans), to… well, a Zombie Bake-Off. And beyond the “picks” there are plenty more to pick from, from Richard Kadrey’s Metrophage to the second book in D.B. Jackson’s historical fantasy series “Thieftaker”, post-apocalyptic Steampunk worlds of endless snow (Romulus Buckle), on and on. (It’s also a pretty big week for the “Seen but not Heard” listings, led by Neptune’s Brood by Charles Stross, so don’t forget your reading glasses alongside your earphones this month.) Happy listening, and sorry this one is coming so very late this week. It’s practically time for another post…

Out in print last year and now in audio is a science fiction title which leads my picks this week: The Fractal Prince by Hannu Rajaniemi, with narrator Scott Brick reprising his role as narrator on The Quantum Thief, though the publisher has changed from Macmillan Audio to Recorded Books for the sequel. The first book was a marvelous debut, a deep future of encrypted data exchange that bordered on the nearly incomprehensible even to this security software jockey, displaying Rajaniemi’s breathtaking grasp of higher maths as well as compelling writing. Here: “A physicist receives a mysterious paper. The ideas in it are far, far ahead of current thinking and quite, quite terrifying. In a city of “fast ones,” shadow players, and jinni, two sisters contemplate a revolution. And on the edges of reality a thief, helped by a sardonic ship, is trying to break into a Schrödinger box for his patron. In the box is his freedom. Or not. Jean de Flambeur is back. And he’s running out of time. In Hannu Rajaniemi’s sparkling follow-up to the critically acclaimed international sensation The Quantum Thief, he returns to his awe-inspiring vision of the universe…and we discover what the future held for Earth.”

The Thousand Names: Book One of The Shadow Campaigns by Django Wexler is also out from Recorded Books, though instead of months-delayed as Rajaniemi’s it is concurrent with the print/ebook release from Roc Hardcover, and instead of hundreds-of-titles-and-counting Brick as narrator it is Richard Poe, best known perhaps as the narrator on Dan Brown’s Angels and Demons but also a narrator of works by Don DeLillo (Underworld) and Cormac McCarthy (Blood Meridian). Here: “Enter an epic fantasy world that echoes with the thunder of muskets and the clang of steel—but where the real battle is against a subtle and sinister magic.” There’s an excerpt up at Tor.com as well.

More epic fantasy, you say? How about Blood Song: Raven’s Shadow, Book 1 By Anthony Ryan, Narrated By Steven Brand for Penguin Audio, out concurrent with the new US hardcover release and ebook re-releace by Ace. Originally self-published, the (e) book gained a considerable following and now gets the “big publisher” treatment complete with hardcover and audiobook. “Vaelin Al Sorna was only a child of ten when his father left him at the iron gate of the Sixth Order. The Brothers of the Sixth Order are devoted to battle, and Vaelin will be trained and hardened to the austere, celibate, and dangerous life of a Warrior of the Faith. He has no family now save the Order.”

The Arrivals: A Novel By Melissa Marr, Narrated By Matt Burns for Harper Audio, concurrent with the print/ebook release. “Chloe walks into a bar and blows five years of sobriety. When she wakes, she finds herself in an unfamiliar world, The Wasteland. She discovers people from all times and places have also arrived there: Kitty and Jack, a brother and sister from the Wild West; Edgar, a prohibition bootlegger; Francis, a one-time hippie; Melody, a mentally unbalanced 1950s housewife; and Hector, a former carnival artist. None know why they arrived there or if there is way out of the The Wasteland, a world populated by monsters and filled with corruption.”

Though it shows up in the “fiction” listings, The Humans: A Novel by Matt Haig, narrated By Mark Meadows for Simon & Schuster Audio certainly takes a familiar science fictional approach to examining what it means to be human: “The narrator of this tale is no ordinary human, in fact, he’s not human at all. Before he was sent away from the distant planet he calls home, precision and perfection governed his life. He lived in a utopian society where mathematics transformed a people, creating limitless knowledge and immortality. But all of this is suddenly threatened when an earthly being opens the doorway to the same technology that the alien planet possesses. Cambridge University professor Andrew Martin cracks the Reimann Hypothesis and unknowingly puts himself and his family in grave danger when the narrator is sent to Earth to erase all evidence of the solution and kill anyone who has seen the proof. The only catch: the alien has no idea what he’s up against. Disgusted by the excess of disease, violence, and family strife he encounters, the narrator struggles to pass undetected long enough to gain access to Andrew’s research. But in picking up the pieces of the professor’s shattered personal life, the narrator sees hope and redemption in the humans’ imperfections and begins to question the very mission that brought him there.” Zombie Bake-Off By Stephen Graham Jones, Narrated By Scott Sowers for Recorded Books. “It’s time for the annual Recipe Days bake-off in Lubbock, Texas. Soccer moms and grandmothers gather to show off their family recipes, learn new secrets for the perfect shortcake, and perhaps earn a chance to be on the famous cooking show, How Would You Cook It, Then? When the bake-off is crashed by a federation of pro wrestlers – including American Badass, Jersey Devil Jill, Tiny Giant, The Village Person, Jonah the Whale, the Hellbillies, and the fan favorite Xombie – all hell is set to break loose.” 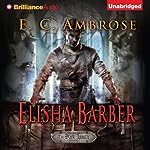 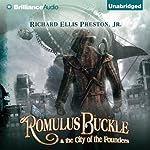 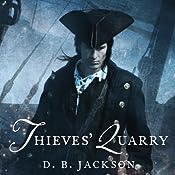 INDIE: These Old Tales By Kenneth W. Cain, Narrated By Alfred Clermont; The Calling: A Supernatural Thriller By Robert Swartwood, Narrated By Tristan Morris; Assault on the Gods: The Society Universe By Stephen Goldin, Narrated By Laura Jennings; Earthfall By Stephen Knight, Narrated By Guy Williams; and The Frozen Sky: The Novel By Jeff Carlson, Narrated By Darrin Revitz

BRILLIANCE AUDIO: Elisha Barber: (Book One of the Dark Apostle) by E.C. Ambrose; Romulus Buckle & the City of the Founders By Richard Ellis Preston, Narrated By Luke Daniels 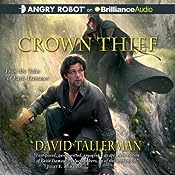