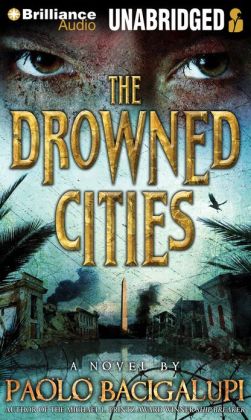 In Paolo Bacigalupi’s The Drowned Cities, the American Dream has shifted into an apocalyptic nightmare, and its legacy is a devastating cycle of violence ripping the country into warring factions. The surviving casualties are quickly drafted into the oppressing armies to perpetuate the cycle of violence. Armies made of children.

The Drowned Cities is a story about child soldiers, the seduction of violence, and survival and it’s the most brutal, unrelenting story I’ve read or listened to in a while time. Like Bacigalupi’s other books, it’s drenched with social commentary that manages not to get in the way of the story or come off as preachy. Instead, we see the effects of rhetoric as we’re thrust through a violent, possible future.

I made a conscious decision to listen to this book without listening to Ship Breaker, which shares the same world with this story (though not any characters), and it held up just fine on its own. If anything, it made me very anxious to go listen to Ship Breaker.

We follow several children – a girl named Mahlia who lost one of her arms to a group of soliders and is apprenticed to the town doctor; Mouse – a boy, who knows the swamps and terrain; Ocho – a wounded soldier boy; and a genetically engineered monster named Tool. Mahlia and Mouse discover Tool dying in a swamp after an escape from one of the armies, and do their best to nurse him back to health. Mahlia hopes that Tool might be their ticket out of the war-torn environment of the Drowned Cities. Unfortunately, the half-man’s been a tool of war mongers his whole life, and is violently opposed to being chained again.

At one point, Mouse and Mahlia get split up, and it’s interesting to see how both of them have to accept violence to survive. They both become child soldiers, in a fashion. Something Bacigalupi did incredibly well was give the murderous squad of soldier boys a sense of humanity. It’d be easy to play them as wicked, child-like monsters absent of concsciences, but Bacigalupi captures their lost humanity in  painful way, showing us they’re victims as much as anyone else, and I was surprised by how much I ended up caring about their fates, despite all the horrible atrocities they’d helped commit.

This is my first experience with Joshua Swanson as a narrator, and he was more than up to the task. It’s not a flashy narration, and Swanson is smart enough to realize it doesn’t need to be for it to be as compelling as it is.

All in all, The Drowned Cities is a violent, gut-wrenching listen, about how violence and rhetoric effect children. It is not for the faint of heart, but it’s an absorbing listen, and highly recommended.