Release Week: The Returned, The Fall of the Kings, Ice Forged, Abaddon’s Gate, Reanimators, and Shadows of the New Sun

AUGUST 21-27, 2013: It’s quite a release week haul this week: a powerful debut in the form of Jason Mott’s The Returned, the return of Neil Gaiman Presents with another full cast “illuminated production” in Ellen Kushner’s Riverside series, a pair of Recorded Books titles first published in print by Orbit Books earlier this year, a concurrent new release read by one of the best narrators in the business, and a star-studded all-original anthology set in Gene Wolfe’s New Sun milieu. And! There’s several more titles well worth checking out in the “Also Out This Week” listings, including a pair of complete series in audio for the first time (Sevenwaters and the Cleric Quintet) and the late James Herbert’s terrifying novel The Fog, read by the masterful Sean Barrett. Meanwhile, in the “Seen but Not Heard” listings this week, there’s just about as long a list of compelling titles, led by SFWA Grand Master James Gunn’s first novel in several years, Transcendental (which seems perfectly suited for a Stefan Rudnicki narration, Blackstone Audio I’m looking at you) and Billy Moon, both out from Tor Books, Ramez Naam’s Crux (which should be coming any day now), and sf author Kay Kenyon’s “first foray into fantasy”, A Thousand Perfect Things, along with a pair of tempting anthologies. The week also brings a free prologue plus first five chapter preview of the audiobook for Brandon Sanderson’s first YA novel, Steelheart, ahead of the full audiobook’s September 24 release date. As usual: Enjoy!

The Returned: A Novel by Jason Mott, narrated by Tom Stechschulte for Audible Inc. and Brilliance Audio, is being reviewed highly for both its compelling, moving story and — with no surprise as the author is a well-regarded poet with two collections under his belt — the language and composition. Mott’s debut novel (out in print/ebook from Harlequin MIRA) has been the subject of a three-week free audiobook campaign of prequel stories, and will in March 2014 come to the small screen on ABC from Bratt Pitt’s Plan B production company [trailer]. Here, narrator Stechschulte (Cormac McCarthy’s The Road, Mark Van Name’s Children No More and No Going Back, Robert McCammon’s Swan Song, and Daniel Wallace’s Big Fish, among other favorites) navigates a “beautiful meditation on what it means to be human” (Booklist), centered on the inexplicable return of a long-dead child: “Harold and Lucille Hargrave’s lives have been both joyful and sorrowful in the decades since their only son, Jacob, died tragically at his eighth birthday party in 1966. In their old age they’ve settled comfortably into life without him, their wounds tempered through the grace of time…. Until one day Jacob mysteriously appears on their doorstep—flesh and blood, their sweet, precocious child, still eight years old. All over the world people’s loved ones are returning from beyond.” I’ve already had the chance to talk to Mott about the book [interview] and look forward to ruminating over this novel with friends once I convince them all to read it — or listen to it. 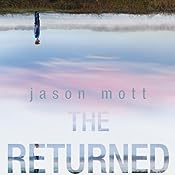 The Fall of the Kings (2003) continues the Riverside series by Ellen Kushner after (Audie Award winning) Swordspoint and The Privilege of the Sword, adding co-author Delia Sherman. Neil Gaiman Presents returns with another full cast “illuminated production” adaptation, narrated by Ellen Kushner, Nick Sullivan, Neil Gaiman, Ryan McCabe, and Katherine Kellgren, visiting Riverside a generation after the events of the previous books: “In this stunning follow-up to Kushner’s The Privilege of the Sword and the Audie-award winning Swordspoint, co-author Delia Sherman (The Freedom Maze) joins Ellen to return to that world of labyrinthine intrigue, where sharp swords and even sharper wits rule. This time, they explore the city’s University, where a troubled young nobleman and his scholar lover find themselves playing out an ancient drama destined to explode their society’s smug view of itself.” Also this week, Tor.com is running a sweepstakes which will give out free downloads of all three Riverside books.

Ice Forged: Ascendant Kingdoms Saga, Book 1 by Gail Z. Martin was published in print/ebook by Orbit in January, beginning a new world for veteran epic fantasist Martin after six books in the world of her Chronicles of the Necromancer series. Here, narrated by fellow epic fantasy veteran Tim Gerard Reynolds (Michael J. Sullivan’s Riyria Revelations) for Recorded Books, Martin takes a starker approach: “Condemned as a murderer for killing the man who dishonored his sister, Blaine “Mick” McFadden has spent the last six years in Velant, a penal colony in the frigid northern wastelands. Harsh military discipline and the oppressive magic keep a fragile peace as colonists struggle against a hostile environment. But the supply ships from Dondareth have stopped coming, boding ill for the kingdom that banished the colonists. Now, as the world’s magic runs wild, McFadden and the people of Velant must fight to survive and decide their fate.” Out from Orbit in June, Abaddon’s Gate By James S.A. Corey is the third book in Corey’s (a pseudonym for the combined pen of Daniel Abraham and Ty Franck) well-received space opera series The Expanse after Leviathan Wakes and Caliban’s War. Here, the book is once again narrated by Jefferson Mays for Recorded Books: “For generations, the solar system – Mars, the Moon, the Asteroid Belt – was humanity’s great frontier. Until now. The alien artifact working through its program under the clouds of Venus has appeared in Uranus’s orbit, where it has built a massive gate that leads to a starless dark. Jim Holden and the crew of the Rocinante are part of a vast flotilla of scientific and military ships going out to examine the artifact. But behind the scenes, a complex plot is unfolding, with the destruction of Holden at its core. As the emissaries of the human race try to find whether the gate is an opportunity or a threat, the greatest danger is the one they brought with them.”

Reanimators by Peter Rawlik is out this week from Night Shade Books, a novel in the Lovecraftian bent complete with Dunwich, Miskatonic University, and “unspeakable horrors”. Here it’s narrated by Oliver Wyman for Audible Frontiers, and follows in a wonderful pattern of some of my favorites of Wyman’s narrations by beginning with: “My name is…” — OK, it begins with “For the record, my name is” but still, this is how both Pohl’s Gateway and Brandon Sanderson’s Legion, both narrated marvelously by Wyman, begin, and let’s not let mere facts get in the way of good fun, shall we? “Two men, a bitter rivalry, and a quarter-century of unspeakable horrors. Herbert West’s crimes against nature are well-known to those familiar with the darkest secrets of science and resurrection. Obsessed with finding a cure for mankind’s oldest malady, death itself, he has experimented upon the living and dead, leaving behind a trail of monsters, mayhem, and madness. But the story of his greatest rival has never been told until now.” 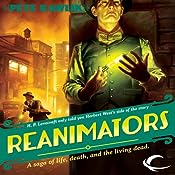 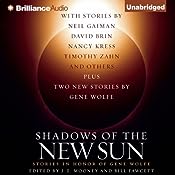 Shadows of the New Sun: Stories in Honor of Gene Wolfe is an all-original anthology edited by Bill Fawcett and Bill J.E. Mooney for Tor Books, read by MacLeod Andrews (Richard Kadrey’s Sandman Slim, Steven Gould’s Jumper, Brandon Sanderson’s Steelheart) and Amy McFadden (Liesel Schwarz’s A Conspiracy of Alchemists) for Brilliance Audio. “In this volume, a select group of Wolfe’s fellow authors pay tribute to the award-winning creator of The Book of the New Sun, The Fifth Head of Cerberus, Soldier of the Mist, The Wizard Knight, and many others, with entirely new stories written specifically to honor the writer hailed by The Washington Post as “one of America’s finest.”” The stories include: “A Lunar Labyrinth” © 2013 by Neil Gaiman; “The Island of the Death Doctor” © 2013 by Joe Haldeman; “A Touch of Rosemary” © 2013 by Timothy Zahn; “Ashes” © 2013 by Steven Savile; “Bedding” © 2013 by David Drake; “. . . And Other Stories” © 2013 by Nancy Kress; “The Island of Time” © 2013 by Jack Dann; “The She-Wolf’s Hidden Grin” © 2013 by Michael Swanwick; “Snowchild” © 2013 by Michael A. Stackpole; “Tourist Trap” © 2013 by Mike Resnick and Barry Malzberg; “Epistoleros” © 2013 by Aaron Allston; “Rhubarb and Beets” © 2013 by Todd McCaffrey; “Tunes from Limbo, But I Digress” © 2013 by Judi Rohrig; “In the Shadow of the Gate” © 2013 by William C. Dietz; “Soldier of Mercy” © 2013 by Marc Aramini; “The Dreams of the Sea” © 2013 by Jody Lynn Nye; “The Log” © 2013 by David Brin; and “The Sea of Memory” © 2013 by Gene Wolfe. 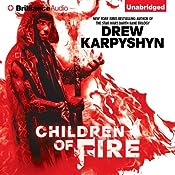 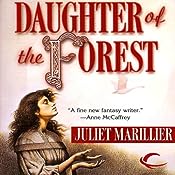 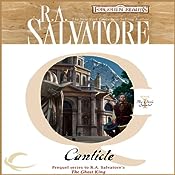