Happy New Year! January 1 brings a $1.99 Kindle Daily Deal for the first novel for teens from the best-selling author of Mistborn and co-author of the concluding novels of Robert Jordan’s The Wheel of Time, Brandon Sanderson, starting a new superhero series The Reckoners: Steelheart. For $3.99 more, add to the Audible edition narrated by Macleod Andrews (Richard Kadrey’s Sandman Slim, Steven Gould’s Jumper). 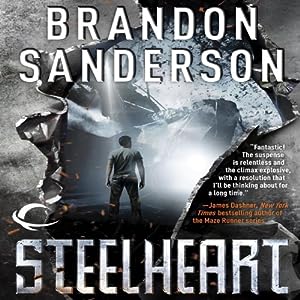 “Ten years ago, Calamity came. It was a burst in the sky that gave ordinary men and women extraordinary powers. The awed public started calling them Epics. But Epics are no friend of man. With incredible gifts came the desire to rule. And to rule man you must crush his wills. Nobody fights the Epics…nobody but the Reckoners. A shadowy group of ordinary humans, they spend their lives studying Epics, finding their weaknesses, and then assassinating them. And David wants in. He wants Steelheart – the Epic who is said to be invincible. The Epic who killed David’s father.”

This entry was posted in Whispersync Deals and tagged brandon sanderson, macleod andrews, steelheart, the reckoners. Bookmark the permalink.