Monday, January 20, 2014: It’s almost hard to believe that for just $1.99 Kindle and a mere $0.99 Whispersync for Voice upgrade to the Audible edition that you can enjoy one of the more oustanding contemporary fantasy audiobooks of the last decade, Zoo City By Lauren Beukes, Narrated By Justine Eyre for Angry Robot on Brilliance Audio. The minimal description doesn’t nearly do the book justice, but let’s start there: “Zinzi December has a Sloth on her back, a dirty 419 scam habit, and a talent for finding lost things. But when a little old lady turns up dead and the cops confiscate her last paycheck, she’s forced to take on her least favourite kind of job: missing persons.” 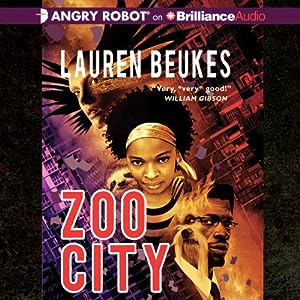 Let’s next go to Dave’s review: ““Urban Fantasy That Does Flinch” — “Fans of China Mieville and William Gibson take note: Lauren Buekes’ “Zoo City” is every bit gritty noir as it is urban fantasy, and it shoots along like bullets through a warm night sky. Which means, this story is not a story for the faint of heart. It culminates in one of the roughest blood baths I’ve ever listened to. The worldbuilding is everything you’d want it to be –particularly the ghettoization of the Zoos — and Beukes turns a phrase better than most and writes broken characters with heart. Her Zinzi is an antihero who despite all her flaws and failings, somehow manages to make us care about her. That said, the ending fell a bit short for me — not so much a payoff of counterfeit bills, but more like a stage magician who closes out her stunning show with a rabbit trick. It’s not bad, and there’s resolution, but it left me wishing for something different. If you ever wondered what might have happened if James Ellroy was raised in Johannesburg by a witch who moonlighted writing 419 scam emails on the side, this is your ticket. All in all, well worth the listen, and I’m eager to see where Beukes takes us next.”

More? How about my review, from back in 2011, from which this shortened version derives: “Every bit as good as it’s billed.” — “With a cover blurb from William Gibson (“Very, *very*good!”) and an Arthur C. Clarke Award, a World Fantasy Award nomination, and other glowing recommendations behind it (Jeff VanderMeer’s review in the NY Times for example) I had very high expectations for Beukes’s second novel. It’s every bit as “phantasmagorical” and wonderful as billed, with a delicious noir-ish plot set atop a sea of bizarre characters in a transfigured modern world. In Zinzi December’s Joburg lies the slum of “Zoo City”, populated by the Animaled, people whose dark deeds have saddled them with faimilars — in Zinzi’s case, a sloth. Building up from a brief stage setting (Zinzi the drug-debted 419-scammer, Benoit her mongoosed boyfriend, some missing items, some not-so-missing but quite dead persons) and dropping Zinzi into a missing persons case of her own, tracking down the female half of a twin boy-girl Afro-pop duo for the duo’s megalomaniacal producer. There’s African tribal magic; there’s gunplay; there’s a brilliant imagination at work behind it all. It’s beyond a doubt worth the (very low) price and (fairly short) time investment and I highly recommend it. There are a few narration quirks here and there — Justine Eyre does a better job than many who have attempted mainline narration in their non-native accents, but from time to time some phrases slip ever so slightly out of accent. Still, all in all, a wonderful audiobook.”

One more? How about The Guilded Earlobe’s review, which calls Zoo City “a unique novel, coupling vivid fantasy concepts with a gritty urban setting and offering one of the most interesting main characters I have experienced in a while.”