Saturday, February 8, 2014: Today’s Kindle Daily Deal lineup includes N.K. Jemisin’s The Killing Moon, book one in her Dreamblood duology published in 2012. Already staking out considerable territory on the fantasy map with her Nebula, Hugo, and World Fantasy Award nominated Inheritance Trilogy (beginning with The Hundred Thousand Kingdoms, which won the Locus Award for Best First Novel), it’s a chance for new fans and old ones to get into her second series on the cheap, at $1.99 Kindle and a $3.99 upgrade to the Audible edition, The Killing Moon: Dreamblood, Book 1 narrated by Sarah Zimmerman for Hachette Audio: 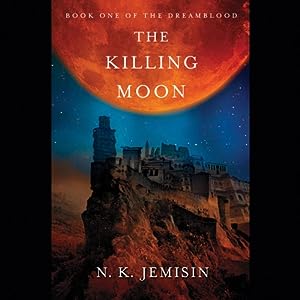 “In the ancient city-state of Gujaareh, peace is the only law. Upon its rooftops and amongst the shadows of its cobbled streets wait the Gatherers – the keepers of this peace. Priests of the dream-goddess, their duty is to harvest the magic of the sleeping mind and use it to heal, soothe . . . and kill those judged corrupt. But when a conspiracy blooms within Gujaareh’s great temple, Ehiru – the most famous of the city’s Gatherers – must question everything he knows.”

This entry was posted in Whispersync Deals and tagged dreamblood, nk jemisin, the killing moon. Bookmark the permalink.