Wednesday, February 12, 2014: Today’s crop of Kindle Daily Deals includes V.M. Zito’s The Return Man, a 2012 novel of post-zombie-apocalypse, priced at $1.99, and offering a $3.99 Whispersync for Voice upgrade to the Audible edition, narrated by Bernard Clark for Hachette Audio. As “Bernard Setaro Clark”, the narrator was absolutely amazing on Hal Duncan’s Vellum: The Book of All Hours, and I’ve had my eye on The Return Man since The Guilded Earlobe’s review which calls it “a well paced thriller that offers a lot of fun zombie action and some truly emotional moments. While Zito relies heavily of thriller conspiracy tropes and stereotypical bad guys, he does a good job creating emotionally complex situations and uses the zombie tableau to examine the value of human life in a way that truly pays off for the reader.” 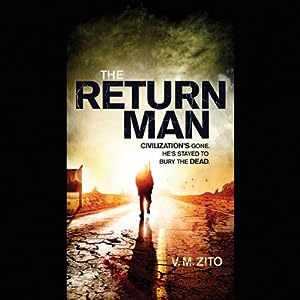 The book copy: “The outbreak tore the US in two. The East remains a safe haven. The West has become a ravaged wilderness, known by survivors as the Evacuated States. It is here that Henry Marco makes his living. Hired by grieving relatives, he tracks down the dead and delivers peace. Now Homeland Security wants Marco for a mission unlike any other: He must return to California, where the apocalypse began. Where a secret is hidden. And where his own tragic past waits to punish him again. But in the wastelands of America, you never know who – or what – is watching you.”