Release Week: Alice Hoffman’s The Museum of Extraordinary Things and David Weber’s Like a Mighty Army, Broken Homes and The New Watch, Metro 2034 and Z 2135, and more

FEBRUARY 12-18, 2013: A packed week this week, both in terms of releases and news. New audiobooks range from magical realism (Alice Hoffman’s The Museum of Extraordinary Things) to space sf (David Weber’s Like a Mighty Army) to dystopian sf (Metro 2034 and Z 2135) to the London-set urban fantasy of Ben Aaronovitch and the Russia-set urban fantasy of Sergei Lukyanenko, to backlist audiobooks from Tricia Sullivan and H. Beam Piper, and plenty more including sf from Ian Whates and Joel Shepherd, Arthurian fantasy from M.K. Hume, the latest Alex Verus novel from Benedict Jacka and Saga of Recluse novel from L.E. Modesitt, and more books in Audible Frontiers’ very welcome productions of A.C. Crispin’s StarBridge series. In terms of news: The 2014 Audies finalists have been announced! I ran down the sf/f/h titles (and collected ebook and CD set links) yesterday, and now that the nominees are out it’s definitely time to jump aboard The Armchair Audies and play along. Pick a category — or two or three! I am more than a book behind in both Richard Kadrey’s and Scott Lynch’s series, so it’s hard for me to take on fantasy (though I’m looking forward to getting to all 5 of those audiobooks eventually); I’ve no hope at all this decade of catching up in either Bujold’s or Cherryh’s, or even Maberry’s, series in the science fiction category. Meanwhile, apparently I missed two bits of recent news: Andy Weir’s Audie-nominated The Martian, initially self-published and then produced into audio by Podium Publishing (who, again, has consistently been doing very high-quality work since its founding), has been completely re-recorded to match the updated Random House edition of the book. And! With a new partnership with Brilliance Audio, the audiobook will soon be available in physical CD formats. Contests? Yup. Blackstone Audio is giving away three signed CD sets of Annihilation by Jeff VanderMeer. One last thing: do check out the “seen but not heard” listings this week — the Kaiju Rising anthology is out, as well as the first installment of Tim Pratt’s new serial project, Heirs of Grace, along with some really intriguing-looking UK releases. Enjoy!

Bestselling magical realist Alice Hoffman’s latest book, The Museum of Extraordinary Things, takes a look at the territory of early 1900s Coney Island, of boardwalk freak show mermaids and a striking photographer, of the dramatic fire which changed New York City in 1911. Drawing comparisons to The Night Circus, the book has been lovingly produced by Simon & Schuster Audio, performed by Judith Light, Grace Gummer, and Zach Appelman concurrent with the print/ebook release from Scribner. “Coralie Sardie is the daughter of the sinister impresario behind The Museum of Extraordinary Things, a Coney Island boardwalk freak show that thrills the masses. An exceptional swimmer, Coralie appears as the Mermaid in her father’s “museum,” alongside performers like the Wolfman, the Butterfly Girl, and a one-hundred-year-old turtle. One night Coralie stumbles upon a striking young man taking pictures of moonlit trees in the woods off the Hudson River. The dashing photographer is Eddie Cohen, a Russian immigrant who has run away from his father’s Lower East Side Orthodox community and his job as a tailor’s apprentice. When Eddie photographs the devastation on the streets of New York following the infamous Triangle Shirtwaist Factory fire, he becomes embroiled in the suspicious mystery behind a young woman’s disappearance and ignites the heart of Coralie.” [Other links: IndieBound CD | Amazon CD | Kindle | Book Trailer | Audio Excerpts]

Oliver Wyman returns as the voice of David Weber’s Safehold military sf series with the release of book 7, Like a Mighty Army, out from Macmillan Audio concurrent with the print/ebook release from Tor. “For centuries, the world of Safehold, last redoubt of the human race, lay under the unchallenged rule of the Church of God Awaiting. The Church permitted nothing new—no new inventions, no new understandings of the world. What no one knew was that the Church was an elaborate fraud—a high-tech system established by a rebel  faction of Safehold’s founders, meant to keep humanity hidden from the powerful alien race that had destroyed old Earth. Then awoke Merlyn Athrawes, cybernetic avatar of a warrior a thousand years dead, felled in the war in which Earth was lost. Monk, warrior, counselor to princes and kings, Merlyn has one purpose: to restart the history of the too-long-hidden human race. And now the fight is thoroughly underway.” [More links: IndieBound CD | Amazon CD | Kindle]

While the first three of Ben Aaronovitch’s fantastic contemporary London-set urban fantasy “Peter Grant / Rivers of London” series came to audio from Tantor, Penguin Audio takes the helm for the fourth book, Broken Homes: A Rivers of London Novel, just a couple of weeks behind the US print/ebook release from DAW — though quite a bit behind the July 2013 UK publication. Very, very happily, Kobna Holdbrook-Smith returns as narrator, for who else could say: “My name is Peter Grant, and I am a keeper of the secret flame—whatever that is. Truth be told, there’s a lot I still don’t know. My superior Nightingale, previously the last of England’s wizardly governmental force, is trying to teach me proper schooling for a magician’s apprentice. But even he doesn’t have all the answers. Mostly I’m just a constable sworn to enforce the new year, I have three main objectives: pass the detective exam so I can officially become a DC; work out what the hell my relationship with Lesley Mai—an old friend from the force and now fellow apprentice—is supposed to be, and most importantly; and get through the year without destroying a major landmark. Two out of three isn’t bad, right?” [More links: IndieBound CD | Amazon CD | Kindle] 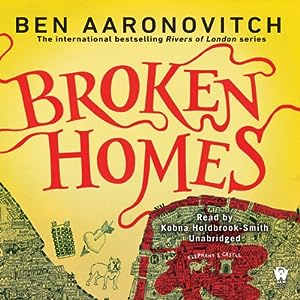 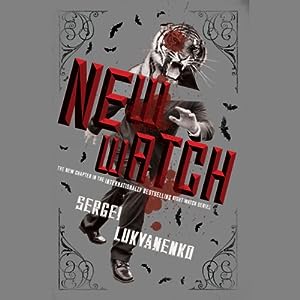 Sergei Lukyanenko’s Night Watch began a 4-book Russia-set urban fantasy series, all read by Paul Michael for Audible Frontiers in late 2010. Now, Lukyanenko and Michael are back with The New Watch: Watch, Book 5, translated by Andrew Bromfield, well ahead of the physical (and even other digital) US releases. “For a millennium, the Others have maintained an uneasy peace that has protected them and the Twilight, their shadowy parallel world beneath our own. But the battle for supremacy between the forces of the Light and the Darkness is far from over . . . Older and more powerful, Light magician Anton Gorodestsky has risen to the top levels of the Night Watch. He is also father to a 10-year-old girl who is destined to become a magician of unprecedented power. When he hears a young boy at the airport screaming that a plane will crash, Anton suspects the child is a prophet—a rare type of Other who portends catastrophe. If Anton is right, than the boy has awakened a terrifying danger—a rare, multi-faced beast that exists to stop the prophecy from coming true. With all of their lives in mortal peril and time running out, Anton must to find a way to keep his gifted young daughter safe . . . and save the Twilight world.” 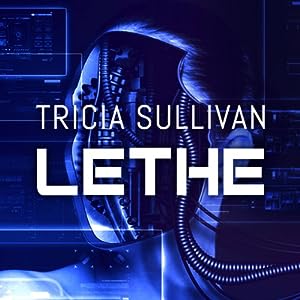