Whispersync Daily Deal: The Woman Who Married a Cloud: The Collected Short Stories of Jonathan Carroll

lineup includes The Woman Who Married a Cloud: The Collected Short Stories by Jonathan Carroll priced at $1.99, with a $1.99 Whispersync for Voice upgrade to the 19-hour audiobook narrated by Robin Bloodworth and Suehyla El Attar for Audible. Carroll first came to my attention when Neil Gaiman selected a pair of his novels, The Land of Laughs and White Apples, for his Neil Gaiman Presents imprint. Here, it’s the 600-page collection of his short fiction: 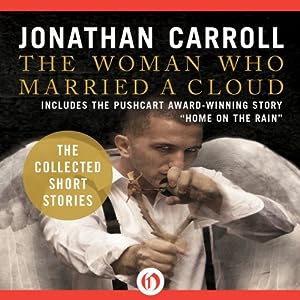 “Thirty-eight extraordinary stories from award-winning author Jonathan Carroll. For more than thirty years, Jonathan Carroll’s writing has defied genre conventions. Known for his novels—including The Land of Laughs, Bones of the Moon, Sleeping in Flame,and many other compelling and often surreal stories—Carroll has also created an eloquent body of short fiction. The Woman Who Married a Cloud brings his stories together for the first time. In the title story, a matchmaking effort goes awry and leads one woman to a harrowing moment of self-discovery. In “The Heidelberg Cylinder,” Hell becomes so overcrowded that Satan sends some of his lost souls back to Earth. And in “Alone Alarm,” a man is kidnapped by multiple versions of himself. By turns haunting, melancholic, and enchanting, Carroll’s richly layered stories illuminate universal experiences, passions, and griefs. Described by NPR’s Alan Cheuse as “so richly imaginative, so intellectually daring,” The Woman Who Married a Cloud is essential reading for Carroll fans and short-story lovers alike.”

This entry was posted in Whispersync Deals and tagged audible, jonathan carroll, open road media, the woman who married a cloud. Bookmark the permalink.