Sunday, March 2, 2014: Another glimpse through the Kindle Daily Deals today shows me two books to pass along. The first is an actual “Daily” deal, The God Patent by Ransom Stephens, at $1.99 Kindle plus $0.99 upgrade to the Audible edition read by Luke Daniels for Brilliance Audio. “When electrical engineers Ryan McNear and Foster Reed coauthored two patents for company cash incentives, they thought it was all just a joke. One describes the soul as a software algorithm, and the other described the Big Bang as a power generator. But when the company crashes, McNear finds himself divorced, desperately hard up, and estranged from his son. As he rebuilds his life, McNear discovers Reed has used their nonsensical patents to draw in top-tier energy investors.” 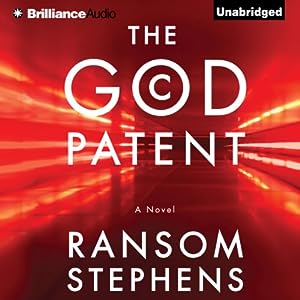 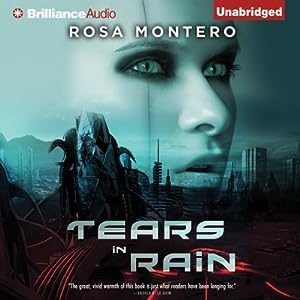 The second title is (I think) on a month-long sale, and it’s one I’ve been intrigued about since its release in late 2012. A novel written in the gritty dystopian near future of Philip K. Dick’s Blade Runner (a.k.a. Do Androids Dream of Electric Sheep) by Rosa Montero and translated by Lilit Zekulin Thwaites for AmazonCrossing, Tears in Rain is on sale for $1.99 in Kindle and has a $1.99 Whispersync for Voice upgrade to the Audible edition, read by Mary Robinette Kowal for Brilliance Audio: “As a replicant, or “technohuman”, Detective Bruna Husky knows two things: humans bioengineered her to perform dangerous, undesirable tasks, and she has just 10 years on the United States of Earth before her body automatically self-destructs. But with “antitechno” rage on the rise and a rash of premature deaths striking her fellow replicants, she may have even less time than she thought. Investigating the mysterious deaths, Bruna delves into the fractious, violent history shared by humans and replicants, and struggles to engage the society that fails to understand her – yet created her.”