Release Week: Words of Radiance, Ghost Train to New Orleans, Tropic of Serpents, Half Bad, The King in Yellow read by Stefan Rudnicki, and Seth MacFarlane’s A Million Ways to Die in the West performed by Jonathan Frakes

FEBRUARY 26-MARCH 4, 2014: And here I thought that last week was packed. This week saw almost 200 titles released on March 4 alone, with another 100 on March 3. My picks of this avalanche include an epic fantasy sequel from Brandon Sanderson, an urban fantasy sequel from Mur Lafferty, anthropological dragon memoir fantasy (yes, it exists, it’s totally a genre, and yes, it’s a sequel), and hey, more fantasy, the highly-anticipated debut Half Bad by Sally Green, and a classic 1895 novel-in-stories, performed by Stefan Rudnicki with Gabrielle de Cuir. And! Seth MacFarlane’s A Million Ways to Die in the West, read by Jonathan Frakes. Because why not have “Number One” read a book by an author who enjoys making “Number Two” jokes? During a time when dysentery was widespread? Why not indeed.

Also out this week: Indexing by Seanan McGuire, read by Mary Robinette Kowal; Anne Bishop’s Murder of Crows; Kelly McCullough’s Broken Blade; Fredric Brown’s 1955 comic science fiction novel Martians, Go Home read by Stefan Rudnicki; fantasy shorts from Michael J. Sullivan and Brian McClellan; Rohan Gavin’s Knightley & Son; Phil Klay’s powerful Redeployment; Scott Nicholson’s McFall; James S.A. Corey’s Star Wars: Honor Among Thieves; and a free 8-chapter sampler of Hugh Howey’s Sand; an intriguing genre-bending book I don’t know quite what to make of yet is Rene Denfeld’s The Enchanted, though I know that I’m interested. (Of note: McGuire’s Indexing and book one in both Brandon Sanderson and Mur Lafferty’s series are in the latest massive Whispersync deal roundup.) But what release week coverage is complete without my bemoaning some “seen but not heard” titles? This week, Black Moon: A Novel by Kenneth Calhoun, John Joseph Adams and Hugh Howey’s anthology The End is Nigh, Robert Reed’s The Memory of Sky, and The Barrow by Mark Smylie top that list. Speaking of topping my weekly lists…

Words of Radiance by Brandon Sanderson, book 2 in The Stormlight Archive after The Way of Kings, is — ahem — the biggest release this week. With a runtime of 48 hours, it already had 74 ratings before it had been released for 24 hours — Sanderson’s fans listen even faster than he can write! But there’s more than size here, as Michael Kramer and Kate Reading continue to work their huge cast epic fantasy magic that worked so well for The Wheel of Time and the first volume in this planned 10-volume series. Out from Macmillan Audio in physical and digital formats concurrent with the print/ebook release from Tor, this is a secondary world epic fantasy with huge worldbuilding, massive battles, intricate magic, and millenia-spanning scope. [More links: IndieBound CD | Kindle | Amazon CD | Amazon Hardcover] 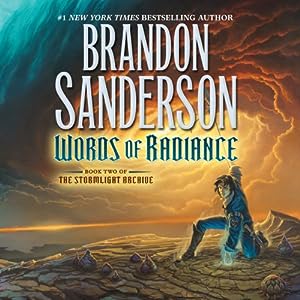 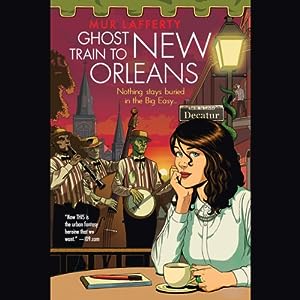 Ghost Train to New Orleans by Mur Lafferty continues the reigning John W. Campbell Award for Best New Writer’s “The Shambling Guides” series as a direct sequel to The Shambling Guide to New York City, which introduced Lafferty’s sardonic, sarcastic take on urban fantasy through the eyes of Zoe Norris, travel guide writer for New York City’s visiting “coterie” of zombies, vampires, and everything else out of every mythology, ever. Out in digital audio from Hachette Audio concurrent with the print/ebook release from Orbit, this time, Zoe takes a bigger train than her usual subway trips around NYC: “Zoe Norris writes travel guides for the undead. And she’s good at it too – her newfound ability to talk to cities seems to help. After the success of The Sbambling Guide to New York City, Zoe and her team are sent to New Orleans to write the sequel. Work isn’t all that brings Zoe to the Big Easy. The only person who can save her boyfriend from zombism is rumored to live in the city’s swamps, but Zoe’s out of her element in the wilderness….” [More links: Kindle | Amazon Paperback]

The Tropic of Serpents: A Memoir by Lady Trent by Marie Brennan is, like the first book in the series (A Natural History of Dragons: A Memoir by Lady Trent) read by Kate Reading for Macmillan Audio. However, thankfully, unlike last year’s many-months wait, this one is out concurrent with the print/ebook release from Tor. “Attentive listeners of Lady Trent’s earlier memoir, A Natural History of Dragons, are already familiar with how a bookish and determined young woman named Isabella first set out on the historic course that would one day lead her to becoming the world’s premier dragon naturalist. Now, in this remarkably candid second volume, Lady Trent looks back at the next stage of her illustrious (and occasionally scandalous) career. Three years after her fateful journeys through the forbidding mountains of Vystrana, Mrs. Camherst defies family and convention to embark on an expedition to the war-torn continent of Eriga, home of such exotic draconian species as the grass-dwelling snakes of the savannah, arboreal tree snakes, and, most elusive of all, the legendary swamp wyrms of the tropics.” [More links: Kindle | Amazon Hardcover] 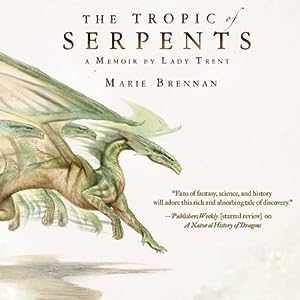 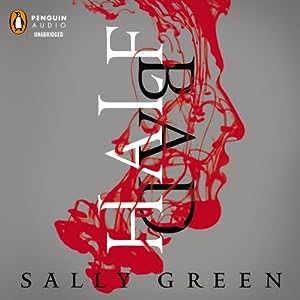 Half Bad is Sally Green’s debut novel, beginning a new middle grade series “Half-Life” — though with some scenes of torture and violence that may make it more appropriate for teenage audiences and up — about witches in modern-day England. It comes strongly recommended by Kate Atkinson (the author of Life after Life), and with about as much pre-publicity buzz as there could be for a debut children’s fantasy. Read by Carl Prekopp for Penguin Audio, it’s out concurrent with the print/ebook release from Viking Children’s. “In modern-day England, witches live alongside humans: White witches, who are good; Black witches, who are evil; and 16-year-old Nathan, who is both. Nathan’s father is the world’s most powerful and cruel Black witch, and his mother is dead. He is hunted from all sides. Trapped in a cage, beaten and handcuffed, Nathan must escape before his seventeenth birthday, at which point he will receive three gifts from his father and come into his own as a witch – or else he will die. But how can Nathan find his father when his every action is tracked, when there is no one safe to trust?” [More links: Kindle | Amazon Hardcover]

The King in Yellow by Robert W. Chambers, read by Stefan Rudnicki with Gabrielle de Cuir for Skyboat Media for Blackstone Audio. I was introduced to a story from this novel-in-stories in Rudnicki’s magnificent anthology Fantastic Imaginings, and here Rudnicki takes on the full work which, as advertised, echoes on in the works of Clark Ashton Smith, Lovecraft, and other gothic fantasists: “Originally published in 1895, Robert W. Chambers’ The King in Yellow is a marvel of supernatural fiction that has influenced a number of writers in the genre, most notably H. P. Lovecraft. Its powerful combination of horror and lyrical prose has made it a classic, a masterpiece of weird fiction that endures to this day.” [More links: Amazon MP3-CD | Amazon CD] 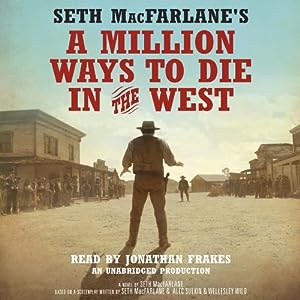 Lastly, out of some parts morbid curiosity, some parts even more morbid curiosity: Seth MacFarlane’s A Million Ways to Die in the West, narrated by Jonathan Frakes for Random House Audio concurrent with the print/ebook release from Ballantine. Because why not have “Number One” read a book by an author who enjoys making “Number Two” jokes? During a time when dysentery was widespread? Why not indeed.  There’s also a film coming May 30, starring MacFarlane, Neil Patrick Harris, Liam Neeson, Charlize Theron, and too many more to list, though, sadly, no sign of Frakes. “Mild-mannered sheep farmer Albert Stark is fed up with the harsh life of the American frontier, where it seems everything and anything can kill you: Duels at high noon. Barroom brawls. Poisonous snakes. Cholera-infected drinking water. Tumbleweed abrasion. Something called “toe-foot.” Even a trip to the outhouse. Yes, there are a million ways to die in the wild, wild West, and Albert plans to avoid them all. Some people think that makes him a coward. Albert calls it common sense.” [More links: IndieBound CD | Kindle | Amazon CD | Amazon Hardcover] 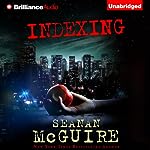 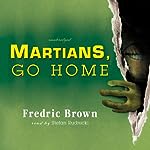 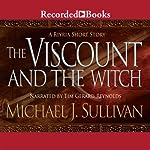