Casting News: Monica Byrne’s The Girl in the Road to be narrated by Dioni Collins and Nazneen Contractor

Since it’s no longer April 1, some serious news to pass along: Monica Byrne’s debut The Girl in the Road (May 20, Crown and Random House Audio) has been cast, with actresses Dioni Collins (BioShock Infinite) and Nazneen Contractor (Star Trek Into Darkness, 24) providing the voices of Mariama and Meena, respectively. I’ve been waiting and waiting on official news that there would be an audiobook, so this is doubly exciting: 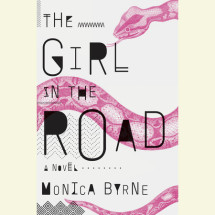 A debut that Neil Gaiman calls “Glorious,” The Girl in the Road describes a future that is culturally lush, technologically slick, and emotionally wrenching.

“In a world where global power has shifted east and revolution is brewing, two women embark on vastly different journeys—each harrowing and urgent and wholly unexpected. When Meena finds snakebites on her chest, her worst fears are realized: someone is after her and she must flee India.  As she plots her exit, she learns of The Trail, an energy-harvesting bridge spanning the Arabian Sea that has become a refuge for itinerant vagabonds and loners on the run.  This is her salvation.  Slipping out in the cover of night, with a knapsack full of supplies including a pozit GPS system, a scroll reader, and a sealable waterproof pod, she sets off for Ethiopia, the place of her birth.

Meanwhile, Mariama, a young girl in Africa, is forced to flee her home.  She joins up with a caravan of misfits heading across the Sahara. She is taken in by Yemaya, a beautiful and enigmatic woman who becomes her protector and confidante. They are trying to reach Addis Abba, Ethiopia, a metropolis swirling with radical politics and rich culture.  But Mariama will find a city far different than she ever expected—romantic, turbulent, and dangerous.

As one heads east and the other west, Meena and Mariama’s fates are linked in ways that are mysterious and shocking to the core. Written with stunning clarity, deep emotion, and a futuristic flair, The Girl in the Road is an artistic feat of the first order: vividly imagined, artfully told, and profoundly moving.”

“It’s transfixing to watch Monica Byrne become a major player in sci-fi with her debut novel: so sharp, so focused and so human. Beautifully drawn people in a future that feels so close you can touch it, blended with the lush language and concerns of myth. It builds a bridge from past to future, from East to West. Glorious stuff.”  —Neil Gaiman, author of The Ocean at the End of the Lane

“Spectacular and intriguing. . . . Enthralling on many levels. . . . The incorporation of evolving views of gender . . . propel this novel into the stratosphere of artistic brilliance.” —Library Journal (starred)

“The most inventive tale to come along in years. . . . The writing is often brilliant, as Byrne paints wholly believable pictures of worlds and cultures most Westerners will never know. . . . Engrossing and enjoyable.” —Kirkus

“Byrne is a science writer and graduate of MIT, but her insight into our near future is as much informed by her extensive travels as her grasp of science. . . . A book you will certainly be hearing a lot about in 2014.” —Guardian (UK)

“Monica Byrne’s vision of India and Africa as an ever-changing maelstrom of language and culture, technology and sexuality is utterly captivating. As Meena and Mariama chase each other’s echoes, Byrne strips away their preconceptions (and ours as well) through that most dangerous of human impulses: our need to understand the past, and to decide our own future.  An electrifying debut.” —Helene Wecker, author of The Golem and the Jinni

“The Girl in the Road is a brilliant novel, vivid, sparky, fearless, intense with a kind of savage joy.  These journeys–Meena’s across the Arabian Sea and Mariama’s across Africa–are utterly unforgettable.” —Kim Stanley Robinson, author of 2312 and Red Mars

“Monica Byrne has written the road trip novel you didn’t know you were waiting for. A genuine and extraordinary journey. Take it.” —John Scalzi, author of Redshirts

This entry was posted in news and tagged dioni collins, monica byrne, nazneen contractor, the girl in the road. Bookmark the permalink.

One Response to Casting News: Monica Byrne’s The Girl in the Road to be narrated by Dioni Collins and Nazneen Contractor