Whispersync Daily Deal: The Stress of Her Regard by Tim Powers, read by Simon Vance

Friday, April 18, 2014: Today’s Kindle Daily Deal listings includes Tim Powers’ 1989 novel The Stress of Her Regard for $1.99 with a $1.99 Whispersync for Voice upgrade to the Audible edition, read by Simon Vance for Blackstone Audio, a fantastic audiobook which Dave calls “without a doubt one of the most terrifying and disturbing books I’ve read or listened to” and which I reviewed as “a wonderful and dark novel of a fictionalized Shelley, Lord Byron, and John Keats, and of the more completely fictional Michael Crawford, amidst a world of vampires and poetry”, calling Vance’s narration “magnificent”. 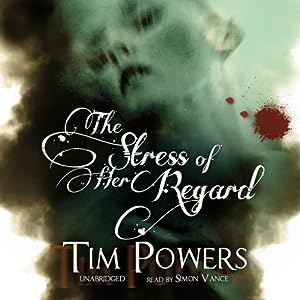 “When Michael Crawford discovers his bride brutally murdered in their wedding bed, he is forced to flee, not only to prove his innocence but to avoid the deadly embrace of a vampire who has claimed him as her true bridegroom. Joining forces with Byron, Keats, and Shelley in a desperate journey that crisscrosses Europe, Crawford desperately seeks his freedom from this vengeful lover who haunts his dreams and will not rest until she destroys all that he cherishes. Told in the guise of a secret history, this tale of passion and terror brilliantly evokes the 19th century. The chilling horror and adventure blend to create a riveting romantic fantasy.”

This entry was posted in Whispersync Deals and tagged simon vance, the stress of her regard, tim powers. Bookmark the permalink.