Review: The Slow Regard of Silent Things by Patrick Rothfuss 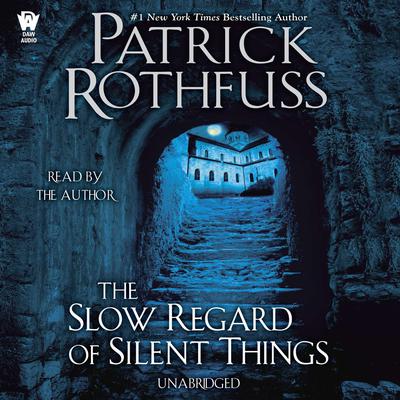 It is rare for a book to begin with a direct challenge from the author to the reader. “Don’t read this!” Patrick Rothfuss practically screams at us in the foreword to The Slow Regard of Silent Things, a spin-off novella set in the world of The Kingkiller Chronicle. After such a jarring introduction it’s hard to come away with any other attitude than “challenge accepted” but it is advice you should heed.

Rothfuss points out a short list of reasons why you shouldn’t read this one. It’s unconventional. It’s too long. It may be jarring if you’re unfamiliar with the lore.  But The Kingkiller Chronicle is one of the more popular fantasy series in recent years for a reason. It is epic, engrossing and bursts at the seams with life and rich detail, even if it is arguably overwritten. The Slow Regard of Silent Things is just overwritten.

As an audiobook the story clocks in at less than four hours.  But it is an empty adventure, four overwritten hours of virtually nothing. The story is simple yet opaque: Auri, a mysterious girl who lives in the mysterious underground complex known as the Underthing awakes one day mysteriously knowing that a unknown visitor will arrive in one week and that she must prepare through a bunch of errands that aren’t quite explained.

No greater context is ever exposited beyond this.  And ultimately the payoff for the journey seems to have been left to resolve within the main series itself (if that), leaving the book feeling like reading a whole bunch of nothing as you wait for nothing to happen.

Readers familiar with The Kingkiller Chronicle should be familiar with the amount of detail Rothfuss can put into on the most trivial of details, but for the most part the story is so interesting it can be forgiven. In this story it is taken to an even further extreme, as in nearly four hours without a word of dialogue we follow Auri underground through a week of mysterious, yet mundane errands as she prepares for the stranger we never truly meet (although in fairness attentive series fans should guess), her every mundane chore divulged in pointless detail. It is almost surreal. It’ll never be said that her domain isn’t fully realized. But so much of what she does is utterly forgettable. What is memorable is only so because you may be taken aback by how much time is devoted to the protagonist’s need to make a few bars of soap.

As an audiobook, The Slow Regard of Silent Things is unnecessarily hindered by the author’s flat reading style, which is so at odds with his eccentric heroine it breaks the very tone of the story. Things she does and thinks that probably shouldn’t be taken literally will feel all too literal, forcing the listener to pay a bit more attention.  And with so little really driving the story paying attention is very difficult.

In the end “slow and silent” feels right.  As a twenty page short story or so Silent Things may have been an excellent appetizer for the trilogy’s upcoming final chapter that would have at least been worth reading for interesting writing. But as it stands it’s a painfully overlong tease, a giant vignette not worth your time or patience.

This entry was posted in reviews and tagged james alexander, patrick rothfuss, the kingkiller chronicle, the slow regard of silent things. Bookmark the permalink.

2 Responses to Review: The Slow Regard of Silent Things by Patrick Rothfuss