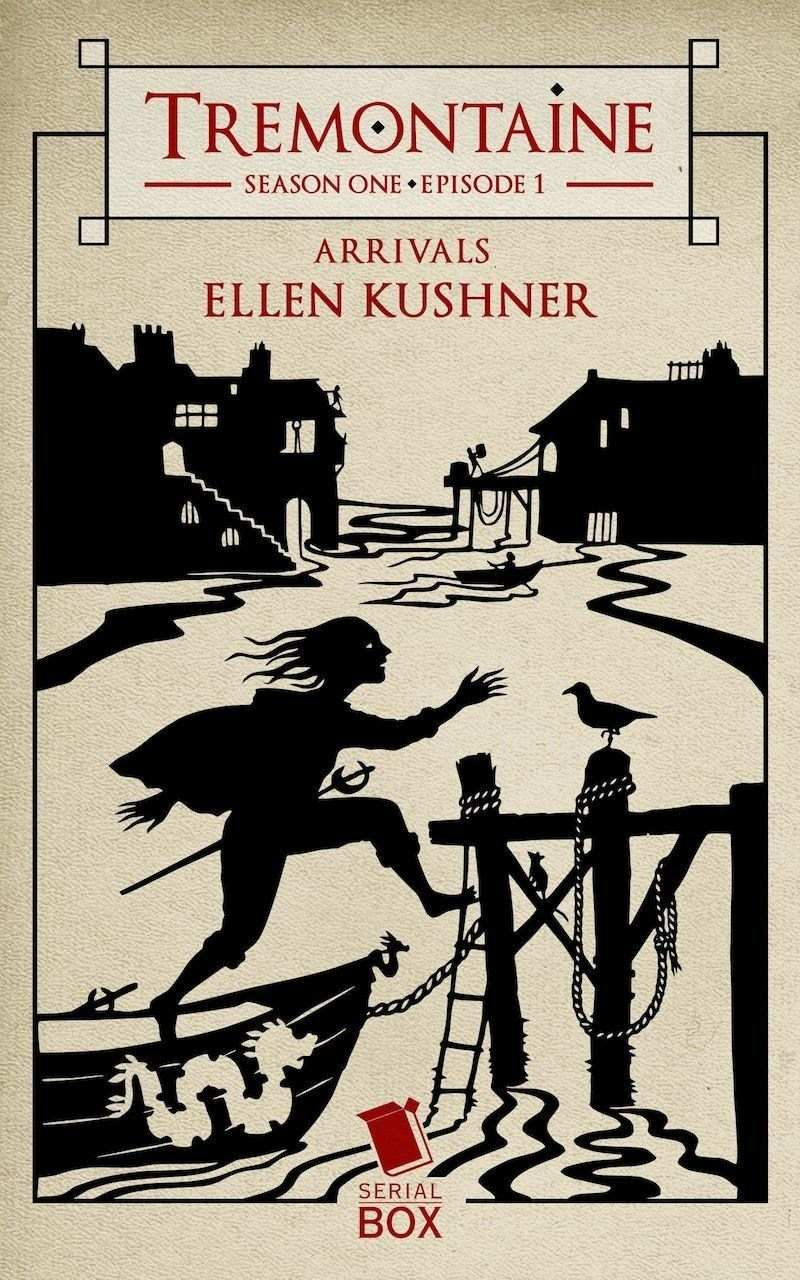 Welcome to the Tremontaine Listen-A-Long! Here there’s swordfighting, chocolate, sex, political maneuvering, chocolate, sex, and also chocolate and sex. The jury is out on the magic. We kicked things off last week with “Arrivals,” the first episode from Serial Box, and it seems clear from the get-go that this is definitely a story for fans of Kushner’s other Riverside books: Swordspoint, The Privilege of the Sword, and The Fall of the Kings. I’ve been pretty outspoken about my love for these books, as you can see in those linked reviews, as well as hopeful about that awesome adaptation Brett Ratner is gonna make — whatever happened to that? Anyway, “Arrivals” did double-duty of making us feel right back at home on the streets of Riverside, while introducing us to a new cast of characters. In that regard, I found the pilot episode to be a success. Riverside felt very much like Riverside, and the cast of characters — particularly their wit, manipulations, dialogue, schemes, dreams, and desires, all felt very true to what we’ve come to expect from Kushner.

Thus far, we’ve met the Duke and Duchess of Tremontaine, who are still coming to grips with their daughter running off with a country boy and having a child with him. (That child will grow up to be a significant character in the Riverside story, though I don’t think not having listened to those books will detract from the story, or this particular storyline). They’re also a little hard up for money, although that seems to be the case of most of the upper class.

Ixkaab Balam is a daughter of a prominent cacao trader, and is in Tremontaine and Riverside on family business. She’s also heard the stories of Riverside’s swordsmen, and has been practicing with a blade herself. As soon as her ship docks, Kaab puts on a sword and goes into Riverside looking for a noble fight to win.

Then there’s Micah, a young girl dressed as a boy who is selling turnips at the marketplace with her older cousin. Micah is also a mathematical genius, not to mention incredibly literal (she may have Asperger’s). Micah’s story is a little bit like Good Will Hunting and Rounders rolled into one — her mathematical genius provides her a big edge in cards, and after a night with an idealist scholar named Rafe, she comes out winning far more than she could’ve made working at the marketplace.

It’s fascinating to me how well this episode encapsulates Riverside and the stories that have preceded it, while also being something different. The Duchess and Duke remind me strongly of Swordspoint (more the politics and less of Richard and Alec). Kaab’s romanticism puts me very much in mind of Katherine from The Privilege of the Sword. And Micah and her scholarly friends echo the scholars in The Fall of the Kings. It’s almost like Kushner and company took pages from all three books, and sewed them together.  Riverside has always seemed progressive — the characters are often bisexual, taking lovers of either sex without experiencing any prejudice. However, the Riverside books have also been pretty white — there was not a lot of diversity in them — at least not that I remember. So having a character like Kaab front and center is a striking and welcome change, and I’m excited to see how her story progresses. Additionally, featuring a character who has a disability (Micah, who appears to have a condition similar to Asperger’s) also feels like a fresh take for this world, and fantasy fiction.

Katherine Kellgren’s work voicing the parts of the Duchess and Duke is delicious. There’s a fantastic scene where the Duchess is instructing her maid to make her dress look deliberately careless, and you can feel Kellgren’s character dripping with delicious schemes and machinations.  Sarah Mollo-Christensen pulls double duty for both Kaab’s and Micah’s storyline, and while she doesn’t bring the same authority and Kellgren does, she handles the job well enough. (Nick Sullivan is credited as a narrator for the episode, but doesn’t perform.)

All in all, Tremontaine is thus far an excellent treat, showing that there are still plenty of surprises left in Riverside. I’m excited to see where Kushner and her co-authors take us in the series.

One Response to Hot Chocolate and Sex! Dave Begins The Tremontaine Listen-A-Long!