“You Want Me to Blow Up the Afterlife?” Dave Reviews City of Blades 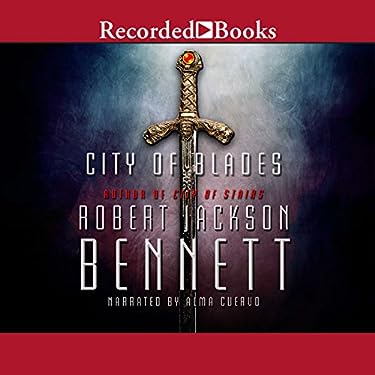 The gods have been destroyed. This isn’t myth or ancient history — it happened less than a lifetime ago. They were oppressive and made slaves of much of humanity until the eventual uprising came. But if the gods are all dead, then what happened to the afterlives they created, and those left in them?

But really, I’m only scratching the surface. Straight up: City of Blades is the best thing I’ve listened to thus far this year. What’s so impressive about it is not just the fantastic world building, but all the balls Robert Jackson Bennett is juggling and how timely it all feels in these politically divisive days. There is political unrest, divine terrorism, magical death swords, and best of all: our hero General Turyin Mulagesh.

Formerly retired General Mulagesh is a woman made of chrome (over 30 who  isn’t defined by being a mother, wife, etc. Also, she’s tough and hilarious). She’s also disabled — she lost her left hand in the Battle of Bulikov and is trying to figure out how to make do with the clunky prosthesis. It’s unusual to get that kind of protagonist in a fantasy novel, which is a shame because daaaaaaamn is Mulagesh a delight to read. While she was a strong supporting character in City of Stairs, she takes the spotlight in this book and does it with style. In the first chapter of the book, some guy with a weapon screams at her Fuck you, Mulagesh, and fuck AIEEEEEEEE!!!! because Mulagesh just kicked his ass when he threatened her. Later on, she responds to a diplomatic gathering, “I’m on vacation you dumb sons of bitches!” Yes, there were times I was literally laughing out loud listening. But in addition to all the fun, she’s driven by a darkness in her history, and a desire to right the wrongs of her past. She’d be right at home sharing a plate of pancakes with Hellboy.

Mulagesh is a portrait of a soldier in a time of political divisiveness (both in the story and, of course, in our own current events). Bennett writes with a fury aimed at the absurdity of war but retaining respect toward the soldiers who live and fight through it. Toward the end of the book we read, “Perhaps it’s just that one who lives a life of war becomes a refugee from it.” That feels like a pretty apt description for how veterans may feel when they return home from war and re-enter society. At times, City of Blades reads as if Sebastian Junger had been embedded in some strange war against dead gods with insurgents from the afterlife, divine artifacts, and those in the armed services stuck in the crossfire of it all.

Whatever the literary equivalent of action movie set pieces is, Bennett has it in spades. There’s a chapter about midway through the book where a sword is being delivered to Mulagesh. We know this is very bad news, but the way Bennett keeps upping the stakes throughout this chapter is nothing short of breathtaking. Bennett also broke my heart playing with some of fantasy’s tropes. Toward the end of the story, it becomes clear that several characters aren’t going to make it out alive. And yet, this is a story that deals with miracles and the divine, right? So I kept hoping maybe there was some way death might be reversed. Please!?!?! But, no. The characters stay dead, and the survivors are ripped apart by the loss of their friends and family.

City of Blades is my kind of book — it has incredible worldbuilding, as well as characters who feel like they’ve lived a lifetime and are struggling with their sins. I was surprised by how touched I was when Sigurd said to another character that there was more to life than the great tasks that we set for ourselves. I mentioned political divisiveness earlier, and the whole story line involving Mulagesh’s history on the battlefield and promotion through the ranks put me in mind of the soldiers who put themselves in harm’s way for their country.

Alma Cuervo is yet again a perfect match for this book. I’m so glad Recorded Books brought her back to narrate Mulagesh’s POV flawlessly. She’s not the flashiest of narrators, but she makes each one of these characters breathe, and it’s hard for me to imagine any of these characters being read by someone else. (I know the third book in this trilogy stars Sigurd, and I really hope that despite this, Recorded Books brings back Cuervo. She is so great at everything she does here.)

City of Blades is the second book in the Divine Cities trilogy, but that shouldn’t scare you off if you haven’t read the first book (although the first book is all kinds of awesome too). It stands on its own just fine, and it’s the best kind of fantasy book — one that will sweep you away to another to inhabit another world, so that when you return to this one, you’ll be able to view if from a whole different perspective. It’s the kind of book that reminds you why you love fantasy.