I knew it, I just knew I should have checked earlier in the day, but, well, I was stinking busy. Still, it’s not too late to snap up one of the best books and audiobooks of the year. Shaman: a novel of the Ice Age by Kim Stanley Robinson is today’s sf/f Kindle Daily Deal at $2.99, and offers a $4.99 Whispersync upgrade to the absolutely masterful Graeme Malcolm narration at Audible. 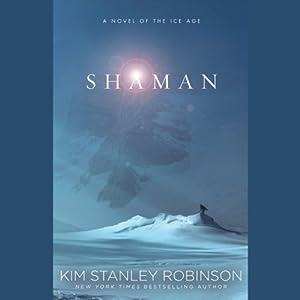 I bought this DRM-free on its release day from Hachette Audio via Downpour, but for those shopping at Audible this is a no-brainer. I’ve elsewhere written of my appreciation for this book: “I’m very susceptible to the impulse of “hey this latest thing I like is the greatest thing yet” so I’ve been trying to temper that and think about it. Some fantastic books this year (Life After Life, The Shining Girls, American Elsewhere, The Best of All Possible Worlds, The Golem and the Jinni, River of Stars, A Constellation of Vital Phenomena, The City of Devi, The Accursed, North American Lake Monsters, being a personal top 10 so far which could have a few more right there, too, Karen Joy Fowler, Gaiman and Mur and Jernigan, Austin Grossman and Will McIntosh and Warren Ellis and Ben Winters, and Max Barry’s Lexicon knocking on the door, with Wilton’s Lookaway, Lookaway, and already liking Lansdale’s The Thicket…) there’s just something about Shaman, by far the most lyrical of Robinson’s books that I’ve read, with the most expertly rendered characters of his that I’ve encountered (and I loved 2312, by the way) that I think it’s really going to be one that sticks around for me. I found myself cheering for Loon’s successes, and aching for his failures. That’s something, right? A note to friends who mostly exclusively like fantasy/sf/etc. — this one’s not really either, it’s set in the Ice Age, with the people who painted bears on caves in France while neanderthals still walked the Earth. There’s a tiny, just a tiny hook in there for you, the narrator, which is (and you can glimpse a bit in this excerpt) “the third wind”. Conversely for my friends who loathe fantasy/sf/etc. — again, this one’s not really either, just grant this unique (and rarely interrupting into the story) narrator its voice.”

Seriously, go get it while the getting is good.

This entry was posted in Whispersync Deals and tagged kim stanley robinson, shaman. Bookmark the permalink.