Release Week: Six-Gun Snow White, The River of Souls, The Dark Between the Stars, Prince of Fools, The Science of Discworld, and Mr. Mercedes

MAY 28-JUNE 3, 2014: June got off to a big start, with star-spanning sf (Kevin J. Anderson’s The Dark Between the Stars), epic fantasy (Mark Lawrence’s Prince of Fools), historical almost-supernatural thriller (Robert McCammon’s The River of Souls), a fairytale recast in the Wild West (Catherynne M. Valente’s Six-Gun Snow White), and yes, horror from Stephen King (Mr. Mercedes). In the ALSO OUT listings there’s an Expanse novella from James S.A. Corey along with Chandler Klang Smith’s 2013 debut Goldenland Past Dark and Marc Levy’s new sf thriller Replay, fiction (Lily King’s Euphoria read by Xe Sands, Emma Straub’s The Vacationers), and plenty more. Some highly-anticipated books in the SEEN BUT NOT HEARD roundup as well, including S.T. Joshi’s Searchers After Horror, Ytasha Womack’s Rayla 2212, Genevieve Valentine’s The Girls of the Kingfisher Club, and Alastair Reynolds’ On the Steel Breeze — but thankfully nearly all of these are set for audio release later this month. Among another big crop of newly ADDED listings: Susan Klaus’ Flight of the Golden Harpy later this month, Josh Weil’s The Great Glass Sea in July, Mike Allen’s collection Unseaming in October, and George R.R. Martin’s latest Wild Cards book, Lowball, in November. Enjoy! 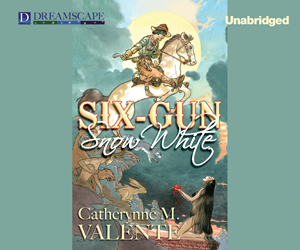 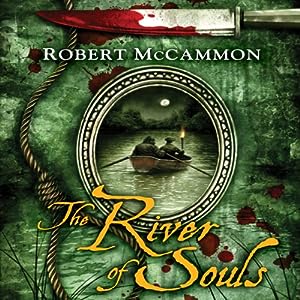 Six-Gun Snow White by Catherynne M. Valente, read by Julia Whelan is out from Dreamscape Media this week as Valente’s Nebula-and-Hugo-nominated January 2013 novella from Subterranean Press gets an audio edition: “A plain-spoken, appealing narrator relates the history of her parents – a Nevada silver baron who forced the Crow people to give up one of their most beautiful daughters, Gun That Sings, in marriage to him. With her mother’s death in childbirth, so begins a heroine’s tale equal parts heartbreak and strength.” Buy: [Downpour]

The River of Souls by Robert McCammon was just published by Subterranean Press on May 31, and got a concurrent release narrated by the always-fantastic Edoardo Ballerini for Audible.  Hat tip to Nathan Ballingrud for pointing out this one, the latest installment in the Matthew Corbett series of historical “almost? supernatural” thrillers: “The year is 1703. The place: the Carolina settlement of Charles Town. Matthew Corbett, professional “problem solver,” has accepted a lucrative, if unusual, commission: escorting a beautiful woman to a fancy dress ball. What should be a pleasant assignment takes a darker turn when Matthew becomes involved in a murder investigation. A sixteen-year-old girl has been stabbed to death on the grounds of a local plantation. The suspected killer is a slave who has escaped, with two family members, into the dubious protection of a nearby swamp. Troubled by certain discrepancies and determined to see some sort of justice done, Matthew joins the hunt for the runaway slaves. He embarks on a treacherous journey up the Solstice River, also known as the River of Souls.  He discovers that something born of the swamp has joined the hunt… and is stalking the hunters with more than murder in mind. What follows is a shattering ordeal encompassing snakes, alligators, exiled savages, mythical beasts, and ordinary human treachery. The journey up the River of Souls will test the limits of Matthew’s endurance, and lead him through a nightmarish passage to a confrontation with his past, and a moment that will alter his life forever. Gripping, unsettling, and richly atmospheric, The River of Souls is a masterful historical adventure featuring the continuing exploits of a young hero the USA Character Approved Blog has called ‘the Early American James Bond.’” 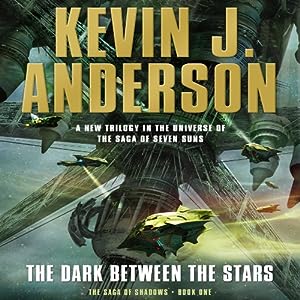 The Dark Between the Stars by Kevin J. Anderson begins a new series, The Saga of Shadows, set after his star-spanning The Saga of Seven Suns series: “Twenty years after the elemental conflict that nearly tore apart the cosmos in The Saga of Seven Suns, a new threat emerges from the darkness. The human race must set aside its own inner conflicts to rebuild their alliance with the Ildiran Empire for the survival of the galaxy. In Kevin J. Anderson’s The Dark Between the Stars, galactic empires clash, elemental beings devastate whole planetary systems, and factions of humanity are pitted against one another.” Audio: Concurrent release from Audible (digital) and Brilliance Audio (CD and MP3-CD), narrated by Mark Boyett. Buy: [IndieBound | Amazon | Kobo| Kindle]

Prince of Fools (The Red Queen’s War, #1) by Mark Lawrence is out from Ace and Recorded Books, read by one of the masters of epic fantasy narration, Tim Gerard Reynolds, replacing James Clamp who has provided the voice for Lawrence’s The Broken Empire series thus far. This lines up with Lawrence’s own shift in focus, away from the story of Jorg to elsewhere in the Broken Empire series, a choice the author wrote about for Waterstones. Here: “The Red Queen is old but the kings of the Broken Empire dread her like no other. For all her reign, she has fought the long war, contested in secret, against the powers that stand behind nations, for higher stakes than land or gold. Her greatest weapon is the Silent Sister—unseen by most and unspoken of by all. The Red Queen’s grandson, Prince Jalan Kendeth—drinker, gambler, seducer of women—is one who can see the Silent Sister. Tenth in line for the throne and content with his role as a minor royal, he pretends that the hideous crone is not there. But war is coming. Witnesses claim an undead army is on the march, and the Red Queen has called on her family to defend the realm. Jal thinks it’s all a rumor—nothing that will affect him—but he is wrong.” With a fantastic first line: “I’m a liar, a cheat, and a coward.”

The Science of Discworld by Terry Pratchett, Ian Stewart, and Jack Cohen, read by Michael Fenton Stevens and Stephen Briggs is out from Random House Audio, concurrent with the first US release of this fiction-and-non-fiction book which now sees its 4th edition, 15 years after its first UK publication: “When a wizardly experiment goes adrift, the wizards of Unseen University find themselves with a pocket universe on their hands: Roundworld, where neither magic nor common sense seems to stand a chance against logic. The universe, of course, is our own. And Roundworld is Earth. As the wizards watch their accidental creation grow, we follow the story of our universe from the primal singularity of the Big Bang to the Internet and beyond. Through this original Terry Pratchett story (with intervening chapters from Jack Cohen and Ian Stewart) we discover how puny and insignificant individual lives are against a cosmic backdrop of creation and disaster. Yet, paradoxically, we see how the richness of a universe based on rules has led to a complex world and at least one species that tried to get a grip of what was going on.” Buy: [Downpour]

Finally: Mr. Mercedes by Stephen King (Scribner, June 3) — While fans of his supernatural car horror may be disappointed to hear that our car-driving killer’s evil is “limited” to the mundane, a new book from King is always an event. Here: “In a mega-stakes, high-suspense race against time, three of the most unlikely and winning heroes Stephen King has ever created try to stop a lone killer from blowing up thousands. In the frigid pre-dawn hours, in a distressed Midwestern city, hundreds of desperate unemployed folks are lined up for a spot at a job fair. Without warning, a lone driver plows through the crowd in a stolen Mercedes, running over the innocent, backing up, and charging again. Eight people are killed; fifteen are wounded. The killer escapes.” Audio: Read by Will Patton for Simon & Schuster Audio; Patton read the Audie Award winning Doctor Sleep last year. Buy: [Downpour | IndieBound | Amazon | Kobo | Kindle] 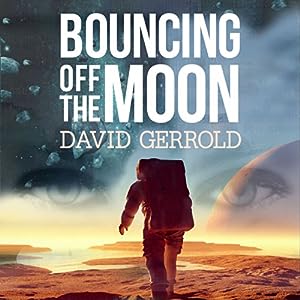